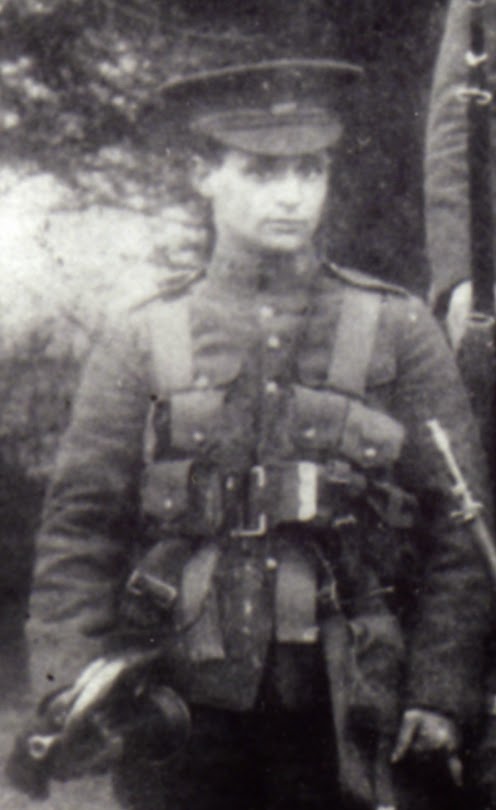 
It has been a very long time since I updated this blog. Other duties have prevented me from coming back to it.  One of these, this year, as we commemorate the start of the Great War, has been to research and record the stories of men and women from the counties of Halton and Peel here in Ontario, who served in that War.  Among those I researched were two men, John Mills and William Tiers Bleakley, both members of the so-called “Port Credit Boys”, according to a photograph in William Perkins Bull’s book From Brock to Currie: the military development and exploits of Canadians in general and of the men of Peel in particular, 1791-1930”. The book is available on line at http://www.ourroots.ca/e/page.aspx?id=407622 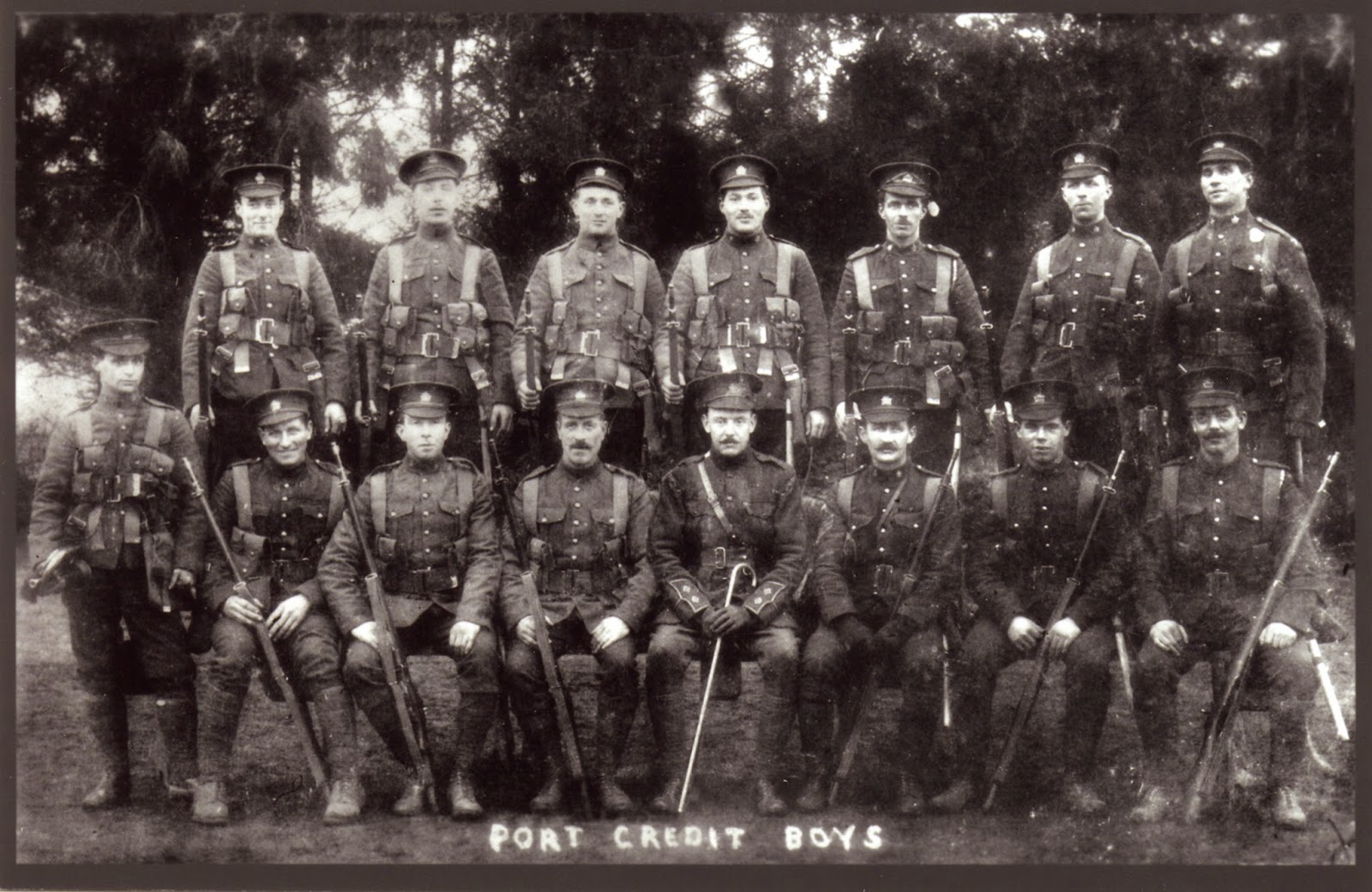 
The “Port Credit Boys” were photographed on Salisbury Plain in England, probably prior to going over to France.  Port Credit is a village situated on Lake Ontario,  part of what was then known as Toronto Township, Peel County and is now the City of Mississauga, to which Port Credit belongs.  Many of the men pictured belonged to the 4th Battalion of the Canadian Expeditionary Force, known as “The Mad Fourth”.


When I checked the names of the men featured in the photo I noticed, standing at the left, one George Cordozo [sic], a bugler, who had been killed in the war.  Curious because of his surname, I decided to do some research on him.  The first area of research into those who served in the First World War is their attestation papers which can be found both on the website of Library and Archives Canada on their database, Soldiers of the First World War: 1914-1918 and also on the subscription website Ancestry.  The information on the attestation papers is very helpful for genealogical research as it gives the soldier’s full name, where and when born, name and address of next of kin, trade or calling, whether or not the person had served in the military and was willing to be vaccinated and to go overseas with the Canadian Expeditionary Force. He was given a medical examination, the results of which were on the back of the form and included apparent age, height, girth of chest, colour of complexion, eyes and hair, any distinguishing marks, and religious denomination.  The form also included the regimental number and might show the regiment to which the soldier was assigned, though this could change later. 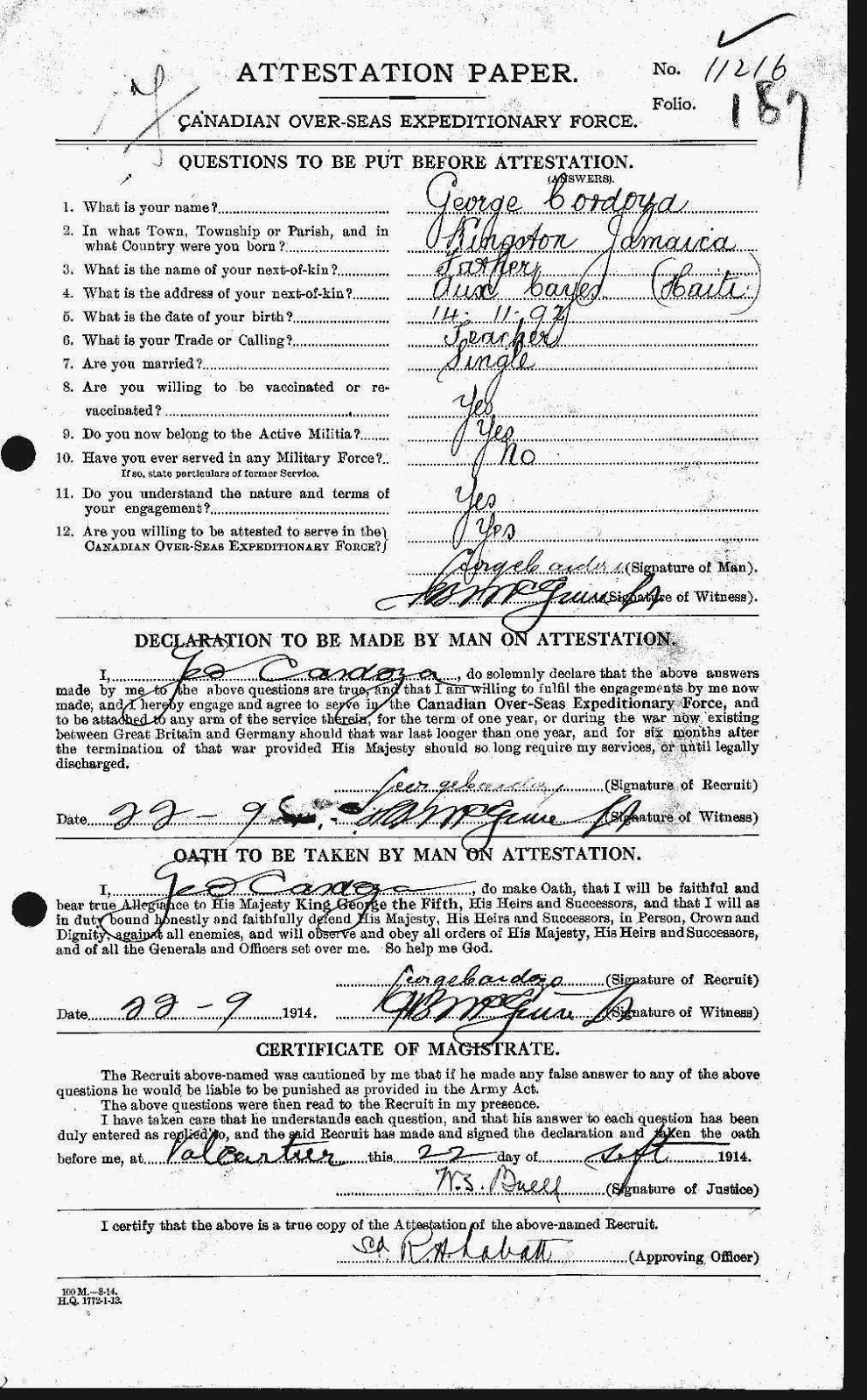 I was surprised to see from George’s attestation form that he had been born 14th November 1892 in Kingston, Jamaica, and I wondered if he might be connected to the large Cardozo family there. He did not name his father, which was a drawback; furthermore he gave his father’s address as Aux Cayes, Haiti. My next task, therefore, was to see if I could find a birth record for George in Kingston. To do this I went to the FamilySearch website of the Church of Jesus Christ of Latter Saints (aka Mormons). There I found a birth record for a Leonard George Cardozo, born in Kingston 14th November but in 1890, not 1892. I was quite sure that I had the right person even with the discrepancy in the year of birth, and further research would support my conclusions.

How then had it happened that a man, born in Kingston, Jamaica, ended up as a bugler and private serving in the Canadian Expeditionary Force, and was he indeed a member of the Cardozo family? His father’s name was given as Uriah Nunes Cardozo – the name is sometimes spelled Cardoza.  I then did a search in FamilySearch to see if I could find a marriage record for Uriah and his wife, Marie Margaret Nicholson, and was successful.  They were married at Holy Trinity Church 9th January1890 and Uriah gave his father’s name as Joseph Cardozo.


To pursue the Cardozo connection my next job was to try to find a birth record for Uriah to a Joseph Cardozo, but here I was stymied as no such birth record showed up. Based on Uriah’s age at marriage – twenty-six – he would have been born in 1864 and was most likely Catholic. Some Roman Catholic records have been transcribed and are available on the Jamaican Family Search website, but I could not find a birth for Uriah.  I did find a marriage record for a Joseph Nunes Cardoza to a Jeanne Louise Herard in 1854, as well as the births of four of their children between 1859 and 1875, but it’s possible that not all the births had been transcribed. So I could find no connection beyond the fact that Uriah gave his name as Nunes Cardozo on his son’s birth record, and his father’s name as Joseph Cardozo on his marriage record. Obviously further research was required!

In my next post I’ll return to George and how he happened to enlist in the Canadian Expeditionary Force and what I was able to find out about his father.