I had intended to return to my post about my grandfather, William Dey Smedmore, but today, January 29th, 2012, is the 94th anniversary of the death of his eldest son, my uncle Victor Dey Smedmore, who was killed in action January 29th, 1918, in during the Great War.
My grandfather, William, died before the War started, on July 2nd, 1914. Would he have been in favour of his eldest son going to to join a regiment? It’s hard to say. Victor sailed to with other Jamaicans intent on joining up, as I wrote in a previous post, “Lest We Forget”. Victor joined the Life Guards – the picture of him above shows him in his regimental uniform -- and was sent to with the British Expeditionary Force as part of the Household Battalion. He was killed in action near on January 29, 1918. The family learned about his death from the War Office by this note which I found in my mother’s papers. 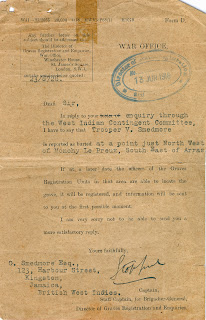 Although the note says that Victor was buried “at a point just North West of Monchy Le Preux, South east of ”, he has no known grave. I wrote to the Commonwealth War Graves Commission and received this response from them:
"Trooper Victor Dey Smedmore, 1140, serving with the Household Battalion, died on 29 January 1918... He has no known grave and therefore he is commemorated by name, along with others from his regiment on Bay 1 on the Arras Memorial, France. The Arras Memorial stands in Faubourg-d'Amiens Cemetery, , 2 kilometres north-west of Arras Railway Station and bears the names of over 35,000 men lost without trace during the battles of ."
Thanks to the kindness of Rory McGregor I do have photos of Victor’s name on the Arras Memorial as well as pictures of the area around. Here is a shot of the memorial showing Victor’s name, 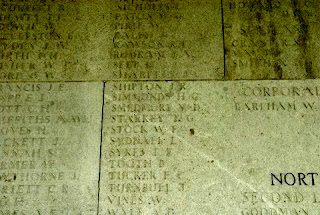 and another of one of the hallways: 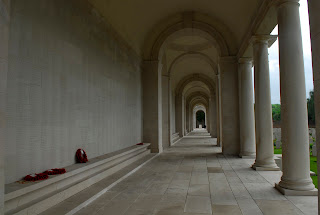 While doing research for a friend in the Jamaica Gleaner, I came across a story of the commemoration of the War Memorial at Wolmer’s School, which Victor had attended and found that his name is also commemorated there.

The notice is from the Gleaner of November 13th, 1923. The monument, erected by the Wolmer’s Old Boys Association, was designed by an old Wolmerian, Vernon Streadwick, and commemorates those men who attended Wolmer’s who had died in the Great War.
Perhaps it’s as well that my grandfather never knew about the War or the death of his eldest son. In my next post I’ll return to William Dey Smedmore and what I was able to learn about him from stories in the Gleaner.
Posted by Dorothy Kew at 13:38 1 comment: