The Commonplace Book -- a Forensic Analysis

I've spent the past few weeks examining Sarah Letitia Brown's Commonplace Book. It's very fragile and I'm wondering how best to preserve it. As I wrote in my last post, the covers are gone, the stitching is coming loose as are several of the pages, and the pages themselves are very fragile and show signs of acidification. I'm thinking of taking it to a conservator in the hope that it can be preserved. My first choice would be Felton Bookbinding in Georgetown. Keith Felton has done excellent work with books from the Canadiana Collection at the Mississauga Library System.

In the mean time I'm considering both scanning and transcribing the pages which will be an awesome task! But first, let me describe the book and its contents. The pages are numbered and I wonder if the entries are in chronological order. If so, the first page with an actual date is page 13, a poem titled "Future -- in Darkness", of four verses, each four lines, dated 9th Sept. 1867 and signed "Robt. Raw, Port Royal." This, as I mentioned previously, was the Reverend Robert Raw, a Methodist minister who was known to be stationed in Port Royal between 1863 and 1868, and who had baptized some of the Brown children. The question I ask myself, then, is this: are pages 1 to 12 written prior to 1867? Unfortunately, they are not signed and I have been able to identify only two of the poems in this section, thanks to Google! One on page 10 is titled "Love" and begins:

This poem, "To Love", I discovered is by Henry Kirke White,a Nottingham poet born in 1785 who died in 1806. Here is his portrait. 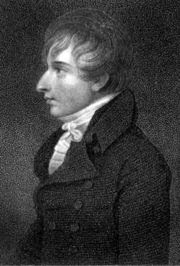 The other poem I was able to identify is titled "Italian Song", and is five stanzas of ten lines each. It comes from a book by William Henry Giles Kingston,(1814-1880) titled The Pirate of the Mediterranean, and is actually headed "Nina's Song". Kingston was born in London and wrote tales for boys, and spent most of his youth in Oporto, Portugal. To be honest, I never heard of either of these writers and one would have to guess that their fame has long since died out, but they must have been still popular when these poems were written in the commonplace book.

The next poem that I identified was actually written by an author whose name I recognized, Felicia Hemans, and was so indicated in the book. It was "The Bride's Lament" and is actually titled "The Bride of the Greek Isles", originally published in 1825 in New Monthly Magazine. 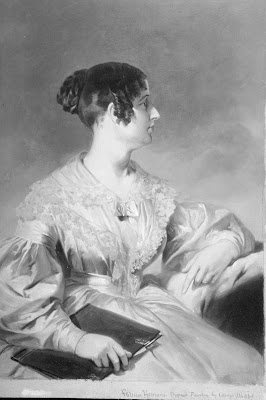 Felicia Hemans (1793-1835), born Felicia Dorothea Brown, was an English poet no longer in vogue. Her one famous poem which many may remember is "Casabianca", the first line of which is:

"The boy stood on the burning deck"

This entry is actually signed, but here again is a mystery. At the bottom of the poem is "Julia, Kingston". Who was Julia? I wish I knew! I'm intrigued by the fact that she clearly indicates she wasn't from Port Royal. Perhaps she was visiting the Brown family.

The entries in the commonplace book are representative of people who knew, understood and loved the literature of their period, some of it well known today, the rest not so much. On page 16 is an excerpt from "The Excursion" by William Wordsworth, followed by four lines of a poem from Drifted Snow Flakes, or Poetical Gatherings from Many Authors by Jane Hamilton Thomas on whom I can find nothing! This short excerpt is signed "Anna". Again, who is Anna? She indicated that the poem was by that prolific author, Anonymous.

Further on I found two verses from "The Corsair" by Byron, then on page 22 a poem in three stanzas, titled "Flora's Feast", which comes from Reunido, and Fugitive Pieces, 1864, by Anna Telluz. I can find nothing on line about Anna Telluz. I wonder if Anne Michaels got the idea for the title of her 1996 novel from the subtitle of this book?

This entry is initialled HDCM, and dated 22/2/71, February 22nd, 1871. On the preceding page is a beautiful illustration by the said HDCM. 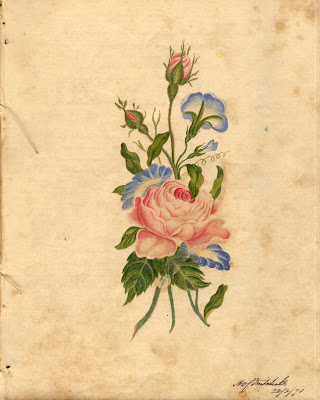 I was able to find out something about this contributor. He was Henry DeClondesley Mitchell, and in the 1878 Kingston Directory he is listed as cashier at the Island Treasury. He was married to Susan Madeline Gully and in 1871 was living at 3 East Street.
I was surprised to find on page 30 an excerpt "from the Russian of Dershavin, translated by Dr. Bowring". From my research I discovered that it was written by Gavrila Romanovich Derzhavin, 1743-1816, 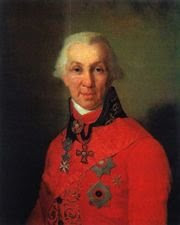 considered the greatest Russian poet before Pushkin. His works were translated by Sir John Bowring, 1792-1872, the fourth Governor of Hong Kong.
All in all, this commonplace book is an eclectic mix of poetry and prose which will keep me occupied for a good long time. In my next post I'll write about some of the people who contributed to the book and whom I've been able to identify.
Posted by Dorothy Kew at 14:54 11 comments: