Eugene Da Costa – he never used the middle name, Rodrigues – was born about 1873, the second child and first son of Joseph and Hannah Rodrigues Da Costa. I have not been able to find his baptismal record, but he was most likely baptized in the Catholic Church. I did not, of course, know him, but I imagine from what I’ve found about him, that he wasn’t much like his sister, Ida. Eugene was a character … a man of definite opinions, and involved in several pursuits chief among which was horse-racing. A great deal of what I’ve learned about him I found reported in the Gleaner, for Eugene was an inveterate writer of letters to the editor and did not mince his words.

As I had no pictures of Eugene I had to try and build a picture of him based on whatever information I could find in the Gleaner. Not long after I began searching for information about him I came across a letter of his to the editor of the Gleaner in which he mentioned that he had written a history of horse-racing in Jamaica. This intrigued me and I set about trying to find the book, without success. It then occurred to me that perhaps he had deposited a copy of the book in the National Library of Jamaica, and sure enough he had. I emailed their reference section, told them I was a relative of Eugene’s and asked if it were possible to get a copy of his book. The reference librarian I dealt with very kindly offered to photocopy it for me, for a modest cost, and there it was … a book written by my cousin, Eugene! 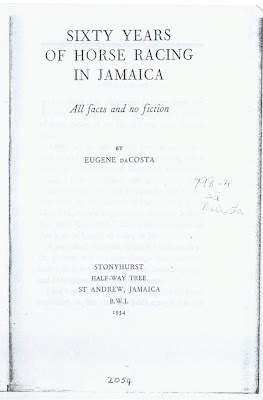 There was no cover, so I had to make do with the title page.

Eugene’s reminiscences about horse-racing in Jamaica covered the years 1874 to 1934, and described the early racing days at the Kingston Race Course and then the move to the racecourse at Knutsford Park in St. Andrew. 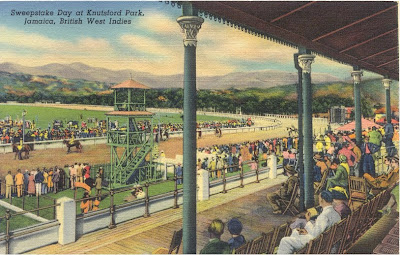 This area is now New Kingston and the racecourse is now Emancipation Park. 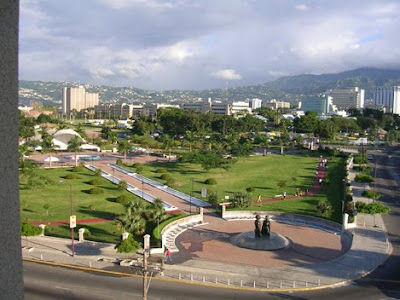 Eugene was very much involved in horse-racing, both as Secretary of the Jamaica Turf Club and as an owner and trainer himself. He was also, according to information I found in the Gleaner, employed by the Jamaica Railway Company (which, sadly, no longer exists) and had an ice cream business at Cross Roads, St. Andrew.

The earliest vital information I could find on him was his marriage on March 26, 1899, to Catherine Rebecca James. At the time he gave his address as Bog Walk, St. Catherine and his occupation as clerk. He and Catherine were married by Father Patrick F. X. Mulry at St. George’s College. They had no children and according to Eugene’s brief obituary in 1951 his wife had predeceased him. I have not been able to find a record of her death.

I found a story in the Gleaner of May 31, 1911, which stated that the City Council had granted Eugene an application for use of the site on the Kingston Race Course to hold a race meeting on two Coronation holidays, June 22nd and 23rd. There were several other stories concerning Eugene and horse-racing in general, as well as numerous letters written by him to the editor of the newspaper about the state of horse-racing in Jamaica. He was somewhat of a combative nature as he was involved in at least two lawsuits, both of which he won.

The closest I got to a picture of the man is this clipping from the Gleaner of June 22, 1939: 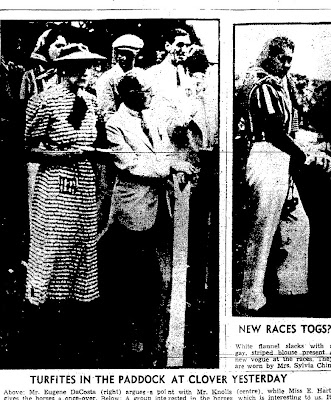 Eugene is at the right in front. Like many of the Da Costas he was not tall! To my mind he looks a lot like my father, his first cousin.

A brief story in the Gleaner of December 28, 1945 described Eugene’s visit to Trinidad. Here it is: 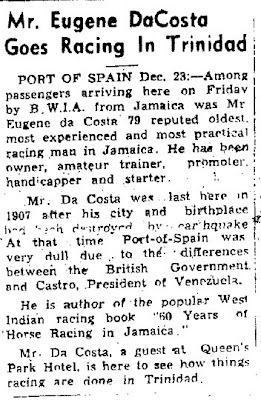 On his return from Trinidad Eugene was quoted in the Gleaner as follows:
“The pari-mutuel turn-over in Trinidad in a single day is better than we in Jamaica can do in a single year.”
He went on to say that Trinidad had the power behind it to become one of the best racing centres in the world. “’On the first day of the meeting”, said Mr. Da Costa, ‘the promoters made a net profit of 60,000 dollars’”. 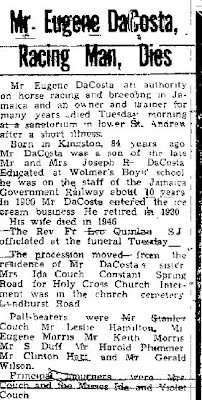 I was surprised to see that he had attended Wolmer’s Boy’s School as I thought he would most likely have gone to St. George’s. His sister, Ida, must have taken care of the funeral arrangements. From what I’ve been told by Ida’s grandson, Timothy, Eugene was almost like a father figure to Ida’s children so brother and sister must have been quite close

There is no doubt that Eugene knew horse-racing inside out and had many years of experience with the sport in Jamaica. So I am very disappointed that Dr. Rebecca Tortello, in her piece on the history of horse-racing in Jamaica, in the Gleaner’s Pieces of the Past, does not mention Eugene at all.
I hope that this small piece about him helps to make up for that.
Posted by Dorothy Kew at 17:02 7 comments: