"They shall grow not old, as we that are left grow old;
Age shall not weary them, nor the years contemn;
At the going down of the sun and in the morning
We shall remember them. " -- Lawrence Binyon

The last item in Sarah Letitia Brown's Commonplace Book is a poem of three stanzas, written in my mother's handwriting, and headed "A Tribute to the memory of Victor Dey Smedmore, 1st Life Guards. Killed in action, Jan 29th 1918". At the top of the page she wrote "copy", so I do not believe she is the author of the poem, and I have no idea who that might have been. 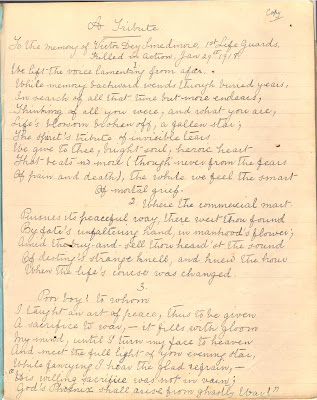 "We lift the voice lamenting from afar, while memory backward wends through buried years ..."

In my last post I had mentioned that I would comment on the contributions made by my grandfather to the commonplace book, but as November 11th comes closer I felt it was more appropriate to write about my uncle Victor and his sacrifice in the First World War, as well as the sacrifices of other Jamaican men who served in that conflict.

The very first post I did for this blog was about Victor. He was the eldest son of William Dey Smedmore and his wife, Amanda. He was born in 1886 in Port Royal, moved with the family to Kingston, and worked at D. Henderson and Company. He went to England in 1915, joined the First Life Guards, went overseas to France where he was wounded twice, and was killed in action January 1918. I often wondered why he decided to go to England to enlist when he could have enlisted in the West India Regiment but apparently there was a contingent of Jamaican men who did go to England for this purpose. The Gleaner reported on some of them on June 7, 1915:

The men listed in the above Roll of Honour were members of the Kingston Parish Church, but there were apparently many more who went to England to join up. My curiosity was aroused as to when Victor sailed for England and thanks to new data on the subscription genealogy database, Ancestry, I found his name on a ship's manifest, that of the ss Coronado, sailing from Kingston to Bristol, arriving at that port on August 15th, 1915. 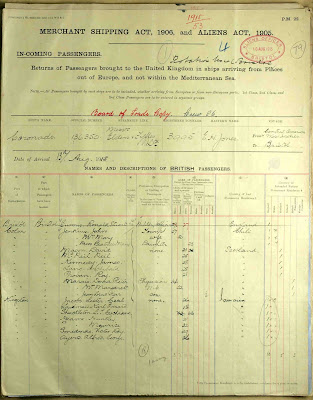 The names are a bit small to read so here they are:

Now, these names mean nothing to me, except for Victor's. It was apparent that they had all seven travelled together on the same ship with the same intent in mind. My question was, had they all enlisted when they got to England? I therefore began a search for the other six. The first source I checked was the Commonwealth War Graves Commission, in the assumption that some of them might, like Victor, have been killed in the War.

The first one I searched for and found there was Karl Everard Laidman, the son of Herbert Edmund and Mary Jane Armstrong Laidman of 65 Norman Road, Kingston, Jamaica. Karl was a private in the Royal Fusilliers, aged 19, and he was killed on March 31st, 1916, a bare eight months after he arrived in England to enlist. He is buried in Lapugnoy Military Cemetery, Bethune, France.

Karl was not the only casualty of that group besides Victor. I also found an A. G. Ayers on the Commonwealth War Graves Commission website, a trooper in the 2nd Life Guards, who died 26 February 1917 and is buried in St. Sever Cemetery Extension, Rouen, France. What then of the other four?

I then searched the online edition of the Jamaica Gleaner to see if I could find any trace of them and I managed to find two more -- Lester Jacobs and Huntley Hearne. Both items were obituaries. Lester Jacobs died March 25th, 1971, at age 83, so I assume he was the Lester Cecil Jacobs listed on the ship's passenger list, though his war record was not mentioned. The obituary, which is brief, mentioned that he was the retired manager of Jamaica Retreading Company and that he was survived by a brother, Caryl, of Miami, Florida and other relatives. Huntley Hearne died April 13, 1964 and his obituary states that he was a "70-year old hero of the 1914 war and an acknowledged artist in the American advertising field". Huntley Hearne had been attached to the Royal Fusilliers and had been awarded the Military Medal for destroying a German pillbox.

I found a few references to Maurice Hearne, who I assume was Huntley's brother, mainly to do with his career as a cricketer. It would seem, then, that he also returned safely from the war. The only one that I could find nothing definitive about was L... Cochrane Shackleton. My searches in the Gleaner brought up articles on a Dr. T. F. Shackleton but this didn't seem to match the Shackleton on the passenger list ... then I noticed that his age was given as 42, whereas the other six men were all younger, between 18 and 29. Was this the doctor? It doesn't explain the differences in first names yet the Gleaner of September 25th 1916 noted that Dr. T. F. Shackleton had been posted to England to the Royal Army Medical Corps. I'm afraid this will remain a mystery!

"But where our desires are and our hopes profound,
Felt as a well-spring that is hidden from sight,
To the innermost heart of their own land they are known,
As the stars are known to the Night;
As the stars that shall be bright when we are dust,
Moving in marches upon the heavenly plain;
As the stars that are starry in the time of our darkness,
To the end, to the end, they remain." -- Lawrence Binyon
Posted by Dorothy Kew at 10:55 4 comments: