The Cunha Family -- How Did They Fit in?

Some years ago I did a fair bit of research for a Trinidadian friend on his Cunha connections in Jamaica. This was a Jewish family, the name being Mendes Cunha, and it was of interest to me because family story had it that my mother's family was connected to Cunhas through the Browns. According to my Uncle Rodney (many of whose family stories turned out to be incorrect!), a daughter of my great-grandfather, Daniel Elias Brown, had married a Cunha. This was one Sarah Letitia Webster Brown, of whom I knew very little save that she was the third child of Daniel and his wife, Sarah Letitia, born 26 December 1863 and baptized in the Methodist Church on 3 March 1864. All I've been able to find out about her since is that she was the informant when her father, Daniel Elias, died in 1891 and that at the time she was living at 49 Rose Lane, Kingston and was single. I have not so far found a marriage for her nor a record of her death. So, where did the Cunha connection come from?

I have a cousin living in Jamaica whom I've known all my life, but it was some time before I figured out how we were connected. And here again was another Cunha connection, in that her grandmother's maiden name was Cunha! I knew her as Aunt Maud. My research led me to Maud’s parents, Clarence Louis Cunha who had married Marie Louise Sewell in the Wesleyan Methodist Church. And then the penny dropped! For I then discovered that Marie Louise was the daughter of one Augustus Robert Sewell, a policeman, and his wife, Sarah Saunders Brown, and Sarah was none other than the sister of my great-grandfather, Daniel Elias Brown! Augustus and Sarah had married in the Roman Catholic Church, and it was not until I was able to get a copy of the record that I could make the connection. Here is what it said:

On the 6th of January 1845 Revd. G. L. Duquesnay joined in lawful wedlock according to the rites of the R. Catholic Church, Augustus Robert Sewelle [sic], a native of Carlisle, Cumberland, England, and Sarah Saunders Brown, a native of Kingston, in presence of:

I haven’t so far tried to track down Augustus Robert Sewell in Cumberland, as I’ve been concentrating on Sarah and her descendants. And if all this sounds as if it just fell into place I can tell you that it took me quite some time to get to the above conclusion.

Once I had the connection to Clarence Louis Cunha I decided to find out more about his family to see if they were part of the Mendes Cunha family. If there is a connection I haven’t so far found it. Clarence was one of the children of Louis Charles Cunha and his wife, Isabel (also known as Elizabeth) Ximenes (which was spelled Himenes in their marriage record.) They were married in the Wesleyan Methodist denomination in 1846 and the record gives very little information save their names, and that they were “of full age”, so I don’t know who their parents were. If Louis were the son of one of the Mendes Cunhas he was most likely illegitimate as he does not appear in the Sephardic Jewish records. Based on his age at death he was probably born about 1819. I should add here that during my research I corresponded with other family connections who were certain that Louis Charles Cunha must have been a Jew who converted and changed his Jewish name, but we have been unable to find any evidence for this.

Louis Cunha was from all accounts a highly respected person in the Kingston business community. On Clarence’s baptismal record he is listed as a gentleman and on another record as the manager of the Commercial Rooms. According to Stephen Hopwood, the Commercial Room was
…”rather like a Chamber of Commerce, but with more importance. It was located on Harbour Street (south side) near King Street. A tower over the building was used for sighting of incoming ships and the report given as to friend or foe and report if mail ships were approaching. Before the post office - it served as a mail drop, and had it own hand stamp for outgoing/incoming mail, and generally served as a post office as well. In other words it served a very important function!”
This illustration by James Hakewill, from his Picturesque Tour of the Island of Jamaica, shows the corner of King and Harbour Streets as of 1825 and is the closest I can come to a picture of the area. 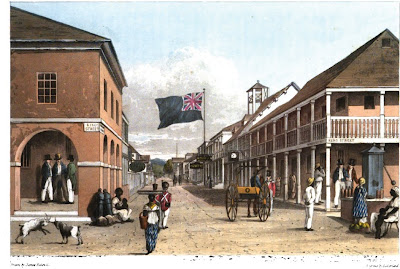 In researching Louis’s connection to this establishment I researched notices from the Gleaner and found that he eventually started up in a similar business with a partner. But before that I did find references to his employment at the Commercial Room in a Parliamentary Report on Governor Edward Eyre’s handling of the 1865 Morant Bay Rebellion. In this report Louis was giving evidence in 1866 in a case regarding a charge of seditious libel printed in a newspaper, the “County Union”;

From reports in the Gleaner it seems Louis decided to go into business with a partner in an endeavor similar to his former position, as per this item in the Gleaner of January 29th, 1878: 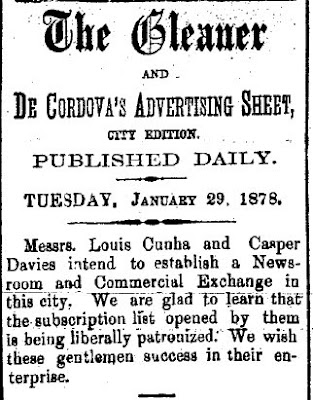 The following month the Gleaner reported the opening of the Commercial Exchange: 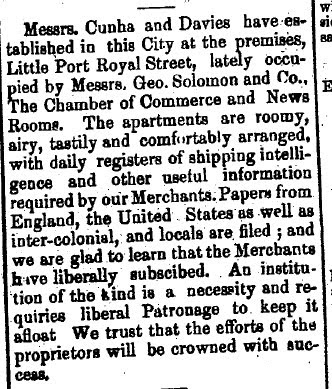 Success was short-lived however and the partnership did not last. The following conflicting advertisements appeared in the Gleaner of September 26, 1879: 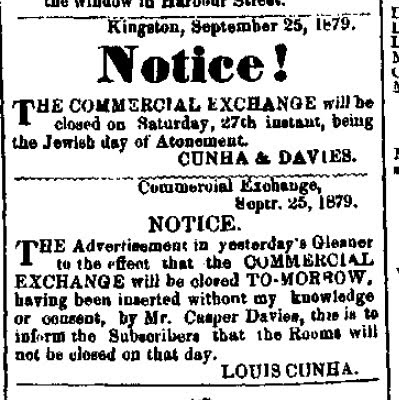 Shortly thereafter the Gleaner published the following notice on January 3, 1880: 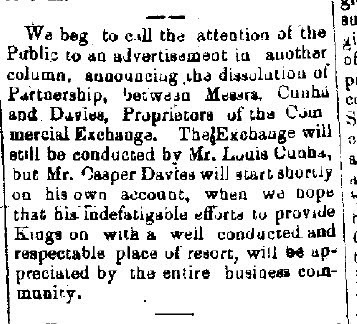 According to the advertisements the dissolution was by mutual accord.

Casper Davies (also spelled Davis) was an observant Jew and this would explain his decision to close the Commercial Exchange for the High Holy Days. Apparently he did this without consulting his partner. Did Louis respond the way he did because he didn’t want the public to think he was Jewish, or was it because he had not had a part in the decision? Whatever the reason this was most likely why the partnership was dissolved.

In my next post I will continue the story of the Cunha family.
Posted by Dorothy Kew at 09:18 2 comments: