In April 1960 we left Trinidad to return to Canada, via Jamaica. We flew from Piarco Airport, near Port-of-Spain 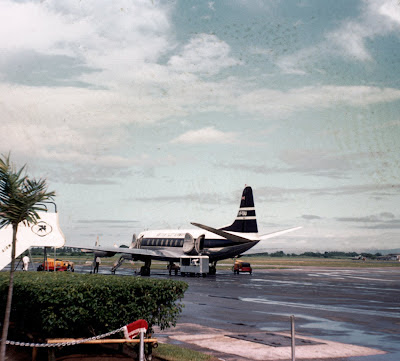 and arrived at Palisadoes Airport, near Kingston, 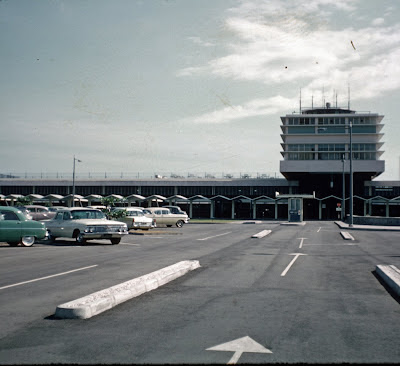 where we planned to stay with family for a week or so before going to Canada. The plan was that we would fly to Toronto via New York and visit my Uncle Joe for about three days. In order to stay even for that space of time we had to get visas from the US consulate. 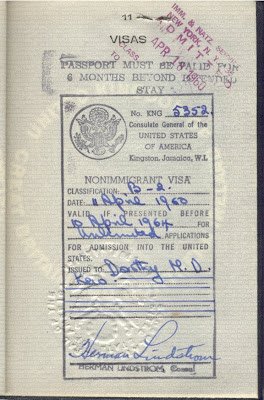 We flew to New York from Palisadoes on BOAC, British Overseas Airway Corporation, now known as British Air. (The acronym was sometimes humourously rendered as "Better on a Camel", much the same way that BWIA (British West Indian Airways) was known colloquially as "But Will it Arrive" or Better Walk if Able".) I remember that we flew first class, which entailed excellent food served on fine china and complimentary wine and liquor! Ah, those were the days of air travel. We shall not see their like again.

We landed at LaGuardia Airport and were met by Uncle Joe and his wife, Alice. We went by cab to their apartment at 1575 Theriot Avenue in the Bronx. 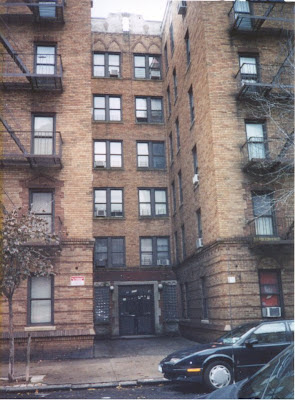 As we had only three days I really wanted to see as much of New York City as I could. Uncle Joe, however, was not that keen on the idea. When I expressed the desire to visit the Empire State Building, his response, in his best Bronx accent, was: "The Empire State Building? That's for hicks!" It turned out that Uncle Joe had never gone there nor had he visited the Rockefeller Centre, the United Nations, or any of those other place the average tourist wants to see. Nevertheless he complied and we travelled by subway and managed to pack in quite a few places of interest.

I had hoped to see my Uncle Leo as well, but that Joe adamantly refused to arrange. He was, apparently, estranged from his brother and would have nothing to do with him. Alice said that Leo had "done something" to Joe which he could not forgive. I had the impression it had something to do with money. Uncle Leo, it appeared, was inclined to frequent the track where he bet whatever money he had on the horses, not always successfully. The impression I got was that Leo, whose occupation was that of master house painter, would work at various jobs in order to make enough money to go to the races. I am sorry now that I did not insist on knowing more about him because I have found Leo to be quite elusive. I cannot find when and how he got to New York, nor can I find him in any census. My searches on Ancestry have turned up only one record for him ... his draft card from the World War II Draft Registration, 1942, known as the "old man's registration" for those born between 1877 and 1897. Here is the front of Leo's card: 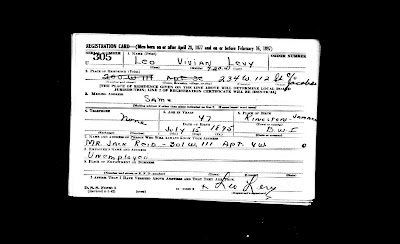 On the other side of the card he is described as five ft. 3 1/2 inches tall, 145 lbs., with blue eyes, grey hair and a ruddy complexion, and with a scar on his right wrist. He was then 47 years old, and according to the front of the card, was unemployed. And that's all I know about him.

At the end of our three day visit we left Joe and Alice. Here I am with Alice in the lobby of the apartment building on Theriot Avenue. 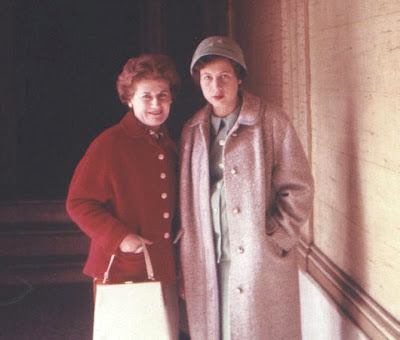 I should point out that I was then expecting our second child. And here are Joe and Alice at the airport, seeing us off to Toronto. 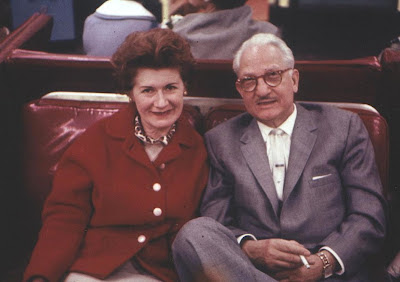 This wasn't the last time we saw Uncle Joe, but more of that in my next post.
Posted by Dorothy Kew at 14:32 1 comment: