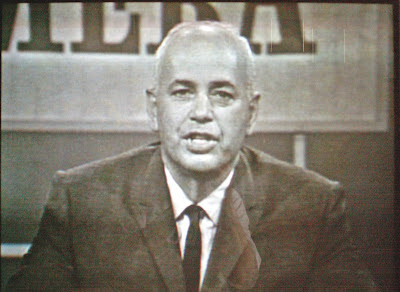 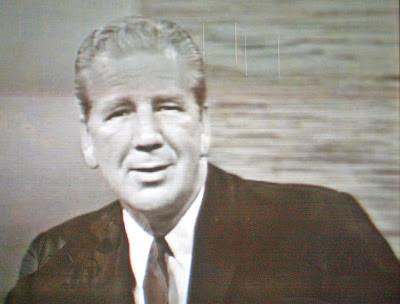 Durward Kirby appeared on Candid Camera between 1961 and 1966. I also remember him on the Garry Moore Show and the Carol Burnett Show.
I used to watch Candid Camera while we lived in Winnipeg. We had settled there in 1960 after leaving Trinidad and Jamaica. As I mentioned in my last post, we visited Uncle Joe for a few days en route from Jamaica to Canada. I didn't expect to see Uncle Joe again for quite some time, if at all, until one afternoon in 1964 when I saw him on Candid Camera. There were four vignettes on the half-hour show, and the last one was the one Uncle Joe was on. The set-up was this: Uncle Joe, whose job at the time apparently was to run errands, was called to an office in Manhattan. There, behind a screen, was a man who asked Joe to take his pants to the cleaners, and a pair of shoes to be shined. The trick to this sequence was that the pants had three legs. What Candid Camera wanted to elicit was Joe's reaction to this odd pair of pants.
Well, he looked the pants over carefully. The man behind the screen asked him to check the pockets to make sure nothing was left in them, 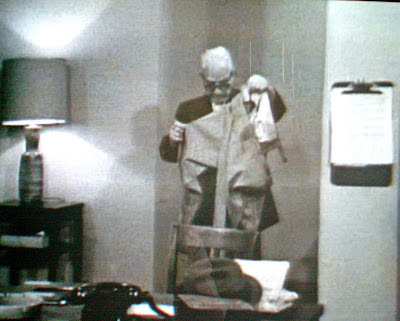 and that was when Uncle Joe realized that the pants not only had three back pockets, but had three legs! Uncle Joe, however, did not react right away. In answer to the comments by the man behind the screen he admired the cut and material of the pants, and even the colour, but he did comment that there were too many back pockets. Next the man asked Joe to take his shoes to be cleaned, and proceeded to pass three shoes over the top of the screen -- a left shoe, a right shoe and a middle shoe. Once again, Joe did not react. Then he was asked to call a number to speak to the man's wife, and of course, was connected to Candid Camera. He didn't seem to catch on then, until the man came from behind the screen and told him he was on Candid Camera. 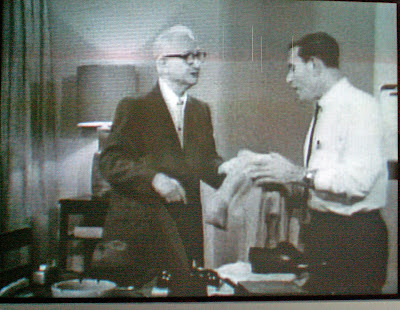 Joe took it well. He laughed and said: "You know what the problem was? You had too many pockets!" And he smiled into the camera. 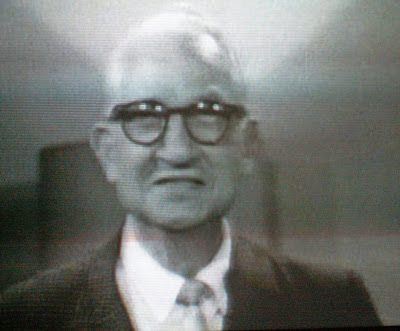 After I saw the show I wrote to Uncle Joe to ask him if it really was him on Candid Camera. He wrote back to assure me that it was indeed him, but he had a different take on his reaction to the skit, in comparison to comments made by Allen Funt. Funt stated that Joe just didn't want to believe what he was seeing, hence showed no reaction. According to Uncle Joe, he didn't want to embarrass the man who apparently had a pair of pants with three legs.

The last time we saw Uncle Joe was when he visited us in 1973. We were living in Burlington, Ontario by then and my parents had come up to visit us. Joe and Alice took a bus from New York to spend a few days in Burlington and so the brothers were united for the last time. Here they are, with Alice. You can see the strong family resemblance between my Dad and Uncle Joe. 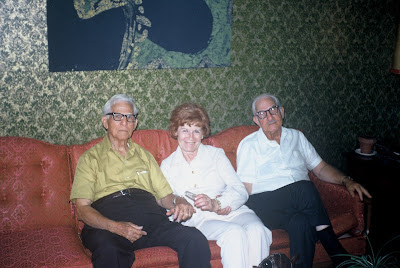 The Watergate scandal was in the news while Joe and Alice were visiting us. I asked Uncle Joe what he thought of the affair and he got very excited about it. I don't know whether or not Uncle Joe was a Democrat, of if he had any political leanings, but he was highly incensed about Watergate and the part played by H. R. Haldenman and John Erlichman.

"Ehrlichman", he said. "Do you know what the name means in German? 'Ehrlich' means 'honest, honourable' ... 'Ehrlichman' means 'honourable man'!"

Uncle Joe died the next year in 1974 of liver failure. Alice, who was eleven years younger than Joe, lived for another thirty years, dying in April 2004 in a nursing home.
Posted by Dorothy Kew at 15:32 2 comments: