The Commonplace Book -- the Contributors

It's been some time since my last post and I still want to continue with the story of my great-grandmother's commonplace book. However, first of all I want to mention a rather unpleasant comment I received on one of my earlier posts, in which I described going back to 5 Holborn Road in Jamaica. The person who left the comment did not identify themselves. Here it is:

"Where are all the black people?! Are you too good for them huh woman!! your despicable you old saggy lady!! "

Apart from the offensive nature of the comment I'm particularly incensed by the suggestion that I'm a racist. What Anonymous doesn't want to admit is that we Jamaicans are a mixture of all races and colours. Surely this is what the Jamaican coat of arms represents! 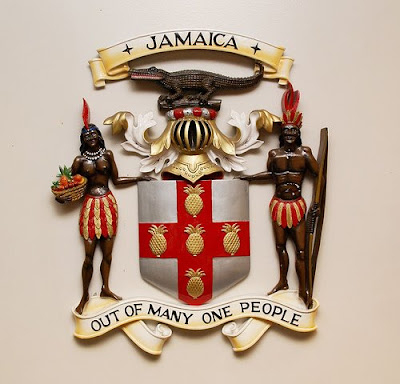 Out of many, one people ... I myself am a mixture ... Take my father's family for example! His father was a French Jew from Bas-Rhin, Alsace; his mother, though Catholic, was the daughter of a Sephardic Jew whose family, the Rodrigues Da Costas, I have managed to trace back to 1740. On my mother's side I am the product, I am sure, of both slaves and slave-owners, though it has been difficult for me to go back far enough to find the records that document this. Jamaica is home to people from all over the world and of all shades. Those of us whose families have lived there for a long while are the products of slavery, whether we wish to admit it or not. Thus I take exception to the above comment. I write about my family as I know it, based on my research.


Now, back to Sarah Letitia Brown's commonplace book. My great aunt, Susan Saunders Brown, the eldest of Sarah Letitia Brown's children, wrote four love poems in her mother's book. I have not been able to find their derivation, so for all I know they may be original. Here is one, titled " Love and Physic", and in brackets, "Leep[sic] Year", signed SSB, and dated 1.11.80. 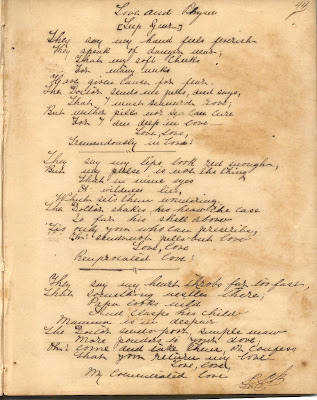 Susan married a widower, John Cassis, on October 17th, 1883. John's first wife, Christiana Augusta Breckenridge, had died of cancer in 1880. Another of Susan's poems, also dated 1.11.80, is titled "Sympathy" and I wonder if it was directed to John. Did her commiseration for his loss eventually lead to love and then marriage? He was much older than her, aged 44 at their marriage while she was only 23. John already had a family of five children by his first wife. The eldest, Catherine, was a year older than Susan. Susan and John between them had four children, two of whom died young, and it seems that Susan did not get over the loss of her youngest, Laura, who died at five weeks, in 1891. Susan died in the Lunatic Asylum, now known as Bellevue Hospital, in November 1899. She may well have been suffering from depression as a result of the loss of her youngest child.

Susan and John's second son, John Madison Cassis, emigrated to Toronto, Canada where he married Fanny Stevens, of Todmorden, Ontario. They had seven children. Here is a picture of John in his garden in Toronto, with his next-door neighbour. John is on the left. 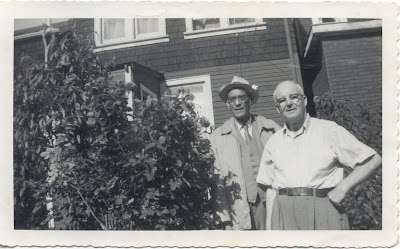 In my next post I'll mention a few other contributors to the commonplace book, one of them my grandfather, William Dey Smedmore.