I'm leaving the Levy Family story for a while to write about the 1907 earthquake which happened 101 years ago on January 14th. This event fascinates me, not just because my family experienced it, but because it became more personal when I discovered that some family members had perished in the earthquake. I am fortunate to have several postcards showing the devastation after the event. This postcard shows a burnt out streetcar on King Street. 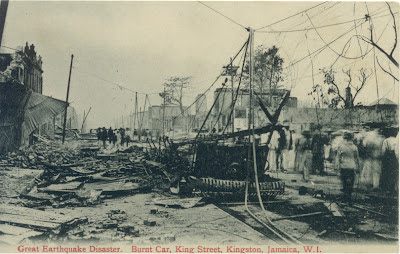 Growing up in Jamaica meant living with the dangers of two natural disasters -- hurricanes and earthquakes. I was less afraid of hurricanes because at least you could see them coming, whereas earthquakes give no warning of their arrival. I lived through Hurricane Charlie in August 1951 and I remember all the preparations we made at 5 Holborn Road to withstand that event. It was very scary while it lasted but we survived with some water damage and the loss of trees which, fortunately, did not damage the house in their fall. Charlie was the worst disaster to hit Jamaica since the 1907 earthquake and did a great deal of damage. You can read more about in on the website of the Office of Disaster Preparedness and Emergency Management. Here is a photo of the United Fruit Company in the aftermath of Hurricane Charlie. 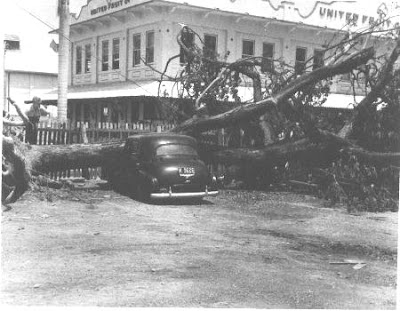 In March 1957 Jamaica experienced an earthquake of some magnitude, the epicentre of which was located in the western part of the island where most of the damage was done. It was about 7:30 in the evening and I was outside playing badminton next door with my friend, Sheila Bewley, when the earthquake struck. We could literally see the earth moving in waves while the electrical wires sparked and flashed. It was terrifying for the brief time it lasted. I had felt other earthquakes but none as strong as that. Frightening as this earthquake was to me it could never equal what the inhabitants of Kingston must have felt that afternoon on January 14, 1907. I will not try to describe the earthquake -- there are many excellent accounts by eyewitnesses and others. I recommend the article from the Jamaica Gleaner Pieces of the Past. Another excellent source is the book, The Cruise of the Port Kingston, by W. R. Hall Caine (London: Collier, 1908) which includes an eyewitness account of the damage which amounted to £2,000,000 as a result of the earthquake and subsequent fires. Over 800 people lost their lives, mainly from falling walls during the earthquake.

Prior to the 1907 earthquake Jamaica had experienced one other devastating quake -- the Great Earthquake of 1692 which destroyed more than half of Port Royal. This event had such an effect on the Jamaican psyche that the event was commemorated until well into the 19th century every year on that day, June 7th, "as a perpetual anniversary fast", as per the The Great Earthquake: Acts of William and Mary,A.D. 1693, . By this statute all places of commerce were closed and the day was to be spent in the churches "with prayers, preaching and singing of psalms". The following police notice to this effect appeared as late as June of 1866: 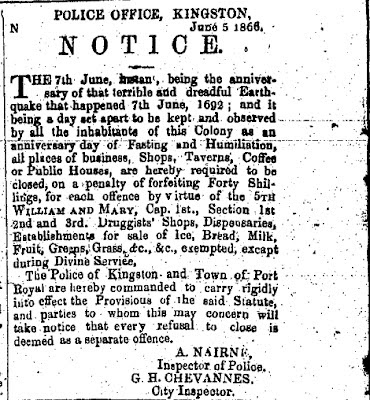 Over the years merchants and shop-keepers complained about having to close their stores on that day and in 1866 the Gleaner reported that several merchants had been fined 24 shillings and costs for not closing their businesses on the day. By 1867 the Government passed Law 4 by which the Act was no longer to be read as obligatory but as permissive. However, well into the 1890s banks and government offices were closed on June 7th and services were held in the churches. 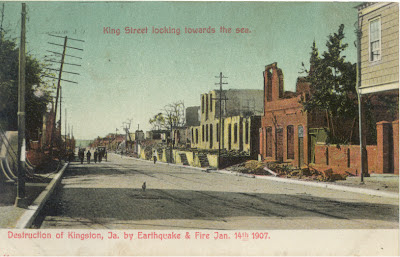 The earthquake of January 14, 1907, struck without warning. Hall Caine compares the noise of the quake as follows:
"The heightening roar is of eternal memory -- it was as though some vast herd of tigers, with warm blood already on their tongues, had been suddenly robbed of their prey".

His first view of the city of Kingston after the quake is devastating:

"At 3:32 Kingston was happy and well. At 3:33 the city was a hopeless wreck, with the very sun itself obscured from our vision. All man's handiwork of a generation, nay a whole century or more, was instantly flouted. A whole community lay in ruins and in tears, in suffering and in death." 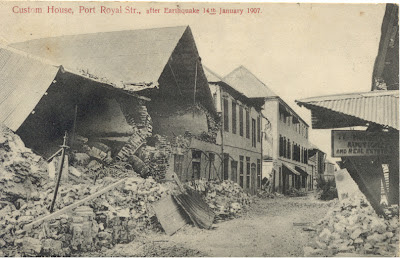 The Gleaner published lists of the dead and injured but many more were killed whose names were never published nor were there death records for them. Many victims were buried in common graves. I have spent much time going through the 1907 death indexes and found whole sections labelled "Earthquake Book" which do not appear to have been microfilmed as I have been unable to find the actual registrations. Most of the dead seem to have been killed by falling walls -- this was a constantly recorded cause of death. When one looks at pictures of the wreckage it is hard to believe that anyone could survive such devastation. This postcard shows the damage at the corner of King and Harbour Streets. 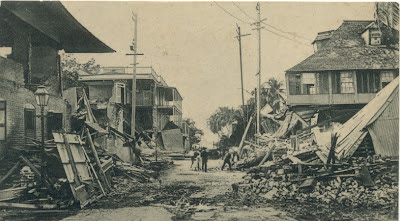 My mother's family, living north of the Parade, were fortunate in that the house at 49 Beeston Street did not sustain serious damage, however the wall around the garden collapsed. By a strange accident of fate, my Uncle Rodney, who would have been eleven at the time, was outside playing in the garden when he was ordered by his father to go upstairs to practise the piano. He grumbled about going but did not disobey. Had he remained where he was he would have been killed by the falling wall.
Many others were not as fortunate. In my next post I'll write about some of the victims of the earthquake.
Posted by Dorothy Kew at 07:50 3 comments: