My mother's family on both sides were from Port Royal, Jamaica, a small, sleepy little town now, whose main attraction is Morgan's Harbour Hotel and Marina, named after the notorious Sir Henry Morgan, former buccaneer and Governor of Jamaica. Port Royal flourished as a pirate haven in the 17th century, gaining the label as "the wickedest city in the world", all of which came to an end with the devastating earthquake of 1692 when more than half the city sank beneath the sea. Port Royal, however, became important to the British as a naval base during the 18th and 19th centuries, particularly during the Napoleonic Wars. Horatio Nelson himself spent time there, at Fort Charles, Port Royal, now known as Nelson's Quarterdeck, and a marble tablet on the wall commemorates this:
"In this place dwelt Horatio Nelson. You who tread his footprints remember his glory"
By 1905 the dockyard was closed and Port Royal became even less important. Many of the inhabitants whose work had been with H. M. Dockyard left and removed to Kingston. 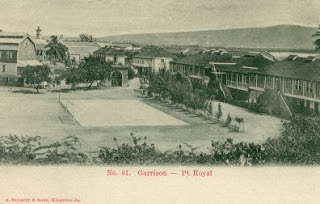 The above photograph, from a postcard, is of the Garrison at Port Royal, by the famous French photographer, Adolphe Duperly, who took many photographs in Jamaica.

My grandfather, William Dey Smedmore, was born in Port Royal ... more about that in another post ... and worked as an Admiralty writer at H. M. Dockyard. He married Amanda Brown, whose family also lived in Port Royal. (Amanda's father, Daniel Elias Brown was a shipwright.) William and Amanda had nine children, seven of whom were born in Port Royal: the first three, Sylvia, Victor and Norman, were all born at Sime Street, while the next four, Elma, Owen, Maud (my mother) and Rodney, were born at Fisher's Row. Rodney was born in 1896, and then along came Lucius, the eighth who was born in Kingston at 49 Beeston Street, which remained the family home until the 1950s; Julian the last was also born there. So, sometime between 1896 and 1899 the family moved from Port Royal. By then, of course, my grandfather had retired from his post at the Dockyard. He would have been about 60 years old and, according to family story, did not work again.

Victor Dey Smedmore, a Casualty of the Great War

Victor was my uncle, but I never knew him. He was born 21 February 1886 at No. 2 Sime Street Port Royal, Jamaica, where William Smedmore, his father, was employed as an Admiralty writer -- a clerk attached to the Royal Navy -- at the dockyard. He was the eldest son in a family of nine, expected to chaperone his sisters whenever they were invited out. I know that he was educated at Wolmer's Boy School, the oldest school in Jamaica, and that he worked as a clerk at Henderson & Co. at the corner of King and Harbour Streets in Kingston, but apart from that, knew very little about him, except that he had fought in the First World War and had been killed in action.

When I started researching my family history I decided to find out more about Victor. I wrote to the Household Cavalry Museum at Combermere Baracks, Windsor, Berkshire, and requested copies of his service papers. I found out that some time in 1915 Victor sailed to England and on August 18, 1915 he joined the First Life Guards as a trooper and was given the regimental number 3900. The 1st and 2nd Life Guards with the Blues and the Royals, make up the Household Cavalry. They have a long and illustrious history dating back to just before the Restoration of King Charles II, when a royal mounted bodyguard was formed in Holland to protect the body of the monarch. Together they are known as the Household Cavalry.

On 1 September 1916, Trooper Victor Dey Smedmore was transferred from the 1st Life Guards to the Household Battalion, where his regimental number became 1140. He embarked with the British Expeditionary Force from Southampton on 8 November 1916 and disembarked at Le Havre, France, 9 November 1916. On Army Form B. 103, Casualty Form -- Active Service, his qualifications are listed as "Bomber, Lewis Gunner". While in London he had spent 18 days in the Life Guards Hospital, from 1 January 1916 to 18 January 1916, with bronchitis. On 30 January he came down with nephritis in the field and was admitted to the General Hospital at Rouen on 2 February 1917. From there he was transferred to England 4 March 1917. He was admitted to the London General Hospital on 5 March 1917 where he remained for 29 days, and was discharged on 3 April 1917.

Victor remained in England until 13 July 1917. He was promoted to the rank of Corporal 25 April 1917 with the Reserve. On 14 July 1917 he was posted as a Trooper to the Household Battalion and embarked from Southampton once again, disembarking once more at Le Havre on 15 July 1917. He was wounded in the field (B.W.-R. Arm, i.e. bullet wound, right arm) on 12 October 1917 and admitted to hospital in Arques. He was apparently wounded again 3 November 1917 (G.S.W.-L. Forearm, i.e. gunshot wound, left forearm) at Boulogne. On 13 November he "joined from Boulogne" at Havre and on 25 November 1917 rejoined the Battalion from Base. In my research into the Household Battalion I came across the book, A Short History of the Household Cavalry, published by the Museum, where I found the following account:
"1917: At the 3rd Battle of the Scarpe River (May 1917), the Battalion fought for 14 days in the capture of Roeux Village, a subsidiary action in the greater battle of Arras (1917). In the 3rd Battle of Ypres (1917), the Household Battalion added the honours of Broodseinde, Poelcappelle and Passchendale to the Household Cavarly's battle honours during the month of October 1917. The Battalion was disbanded in January 1918. In 12 months it had suffered a total of 20 officers and 437 men killed in action." The final entry on Victor's Casualty Form -- Active Service for Trooper Victor Dey Smedmore is "Killed in action, 29.1.18." No place is mentioned.

Back in Jamaica, Victor's younger brother, Owen Smedmore, received a letter, dated 13 June 1918, from a Staff Captain at the War Office which stated that "Trooper V. Smedmore is reported as buried at a point just North West of Monchy Le Preux, South East of Arras". This letter was apparently in response to an enquiry made by Owen through the West Indian Contingent Committee. However, in response to an enquiry I sent to the Commonwealth War Graves Commission, I received the following:
"Trooper Victor Dey Smedmore, 1140, serving with the Household Battalion, died on 29 January 1918... He has no known grave and therefore he is commemorated by name, along with others from his regiment on Bay 1 on the Arras Memorial, France. The Arras Memorial stands in Faubourg-d'Amiens Cemetery, Arras, 2 kilometres north-west of Arras Railway Station and bears the names of over 35,000 men lost without trace during the battles of Arras."

I couldn't help wondering why Victor left Jamaica to enlist in a regiment in England. His father had died in July of 1914, and as the eldest son he was now responsible for his widowed mother and his eight siblings. However, if you read the newspapers of the time you realize that there was a tremendous surge of patriotism among the people of the Empire. Those who did not join up or claimed to be conscientious objectors, were looked on as cowards. Victor was one of many young Jamaican men who sailed to England to join regiments there and many of them did not come back.
Posted by Dorothy Kew at 10:36 17 comments: