The Smedmores of Port Royal 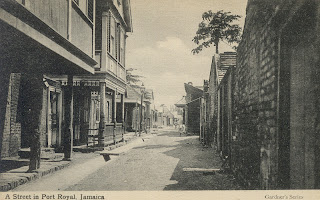 William Dey Smedmore and his family lived in until about 1896, probably on a street very much like this one pictured above. In fact, they lived at two different addresses according to the records I have found. But I’m getting ahead of myself here. Let’s begin with his marriage, as I know very little about him prior to that event.

﻿
William married Amanda Brown at the on 6th December 1882. He was a bachelor, aged forty-four, and gave his occupation as writer, H. M. Dockyard. Amanda was a spinster, aged twenty-one, no occupation. Both gave their abode as . William gave his father’s name as William Dey Smedmore (dead), and Amanda’s was given as Daniel D. Brown.  They were married by the Rev. G. W. Downer, and the witnesses were B. Mortimer Dias and C. L. Cunha.
Well, there are a couple of problems with this record. No record has so far been found for William’s father, so we cannot be sure that this was indeed his name. Secondly, Amanda’s father’s name was Daniel Elias Brown, so the middle initial “D” is incorrect.  Another oddity is my grandmother’s age. I don’t know if my mother ever saw this marriage record, because, curiously enough, she always claimed that her mother’s birth date was 10 July 1864, and that she was actually only eighteen when she married William. However I have found the record of Amanda’s baptism in the Wesleyan Methodist church, in Jamaican Family Search, and she was definitely born on 9 August 1861, which would agree with her age at marriage. It seems odd to me that my grandmother’s children had a completely different date for her birth, not just a different year but a different month and day!
William’s occupation of “writer in H. M. Dockyard” was also puzzling. I discovered that a writer was  a clerk, a civilian employee in the Royal Navy, at the Dockyard in . William’s close friend, George Christopher Baylis, who was a  connection through marriage to his wife’s half-sister, was also a writer at the naval yard.
The first three children were born at in . According to the birth records the two eldest, Sylvia and Victor, were born at no. 2 Sime Street, in 1884 and 1886 respectively, and the third child, Norman, was born in 1887 at no. 1 Sime Street. Shortly thereafter they moved to Fishers Row. I came across a brief note in The Gleaner of 1st May 1888 which mentioned this move.

So it appears that the Smedmore home was to be taken over to be used as barracks for the Army. Might this have had something to do with a story my mother told me about her older brother, Victor? As a young child he had reported seeing a soldier in military dress walking up and down the balcony or piazza of the house they were living in. The tale was that the house had been a barracks and that Victor had seen a ghost. Victor would have been about two years old at that time. It’s possible he saw a real soldier if military personnel came to the house to inspect it prior to taking it over.  At any rate the family moved from there to Fishers Row where the next four children were born – Elma in 1889, Owen in 1891, Maud in 1894 and Rodney in 1896. Then, some time after this they removed to where the last two children were born – Lucius in 1899 and Julian in 1902.  By 1896 William Dey Smedmore was sixty years old and had retired from his position at the Dock Yard. The family settled down in a large house at and I have written about that house in a previous post.
﻿
In my next post I’ll relate the stories I heard about my grandfather from my mother, as well as a few other items I found in The Gleaner  about him … gold to the enquiring genealogist!
Posted by Dorothy Kew at 16:19 1 comment: