The last time I saw my mother was in April 1976 when we all went to Jamaica to help celebrate my parents' 50th wedding anniversary. They were married April 27, 1926 at the Kingston Parish Church and had wedding pictures taken at my mother's home at 49 Beeston Street. Here is a picture of their wedding party: 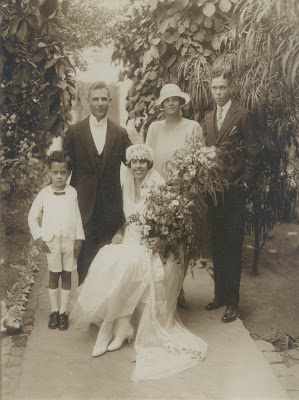 My mother is seated in front, with my father at her right. Benind her is her bridesmaid, Vera Cox (who married Errol Henriques), and beside Vera is the best man, Julian Smedmore, my mother's youngest brother. The little boy at the left of the picture is Jack Duffus, who was the ring bearer.

All the parties who took part in my parents' wedding were at the fiftieth anniversary and posed for this photo: 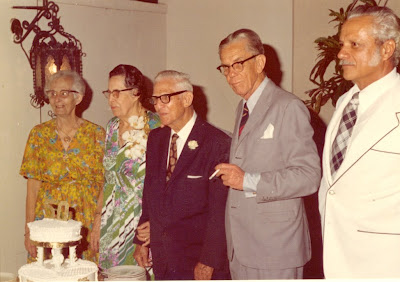 From the left they are Vera Henriques, my mother, my father, Julian Smedmore and Jack Duffus. Sadly they are now all gone. My mother has planned to visit us in Ontario in early 1978 but died suddenly in her sleep on December 14, 1977. I made the trip down to Jamaica for her funeral and brought back with me various of her belongings such as photographs, jewellry, some letters, and a rather battered looking book, with no cover. The book meant nothing to me at the time ... it appeared to be full of handwritten verse and some prose, with the occasional illustration of a flower. There were different coloured pages, though rather acidified and the spine, such as it was, was falling apart. One could see that it had been sewn and that there had been a cover at one point. 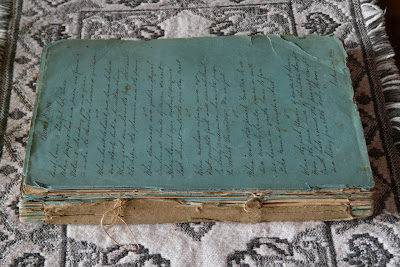 It was some time before I really began to look carefully at this book. I discovered that some of the entries had initials beside them and with some effort I have been able to identify most of the people who wrote these entries. Only two entries have actual names beside them: one is "Julia", the other "Anna". (I think I know who Anna was.) A few have dates, and these are quite old. The earliest is 1867, and appears on page 13 ... the pages are numbered ... so for all we know the entries on the pages before this may be even earlier. Since the book was in my mother's possession ... though I never saw it in her lifetime ... it must have come down to her from one of her parents. I have no solid evidence to prove this but I believe the book may have belonged to my mother's grandmother, Sarah Letitia Brown. I shall try to explain why I believe this.

My mother never spoke of her grandparents, probably because she didn't know them. Her grandfather, Daniel Elias Brown, died before she was born and she would have been only four years old when her grandmother, Sarah, died. What little I know about Sarah comes only from the research I have done. When I first began the research I questioned my uncle, Rodney Smedmore, about the family. He knew that his grandfather was Daniel Elias Brown but he thought that his grandmother had been a Miss Williamson who had married a McDonald, and then married Daniel on the death of her husband. He knew this because his family knew Daniel's step-daughter, Elizabeth McDonald who married George Christopher Baylis, who like my grandfather, William Dey Smedmdore, was employed at the Port Royal Dockyard. So I searched for the record of Sarah's first marriage and found that her maiden name was Huggins, not Williamson. (I have no idea where Rodney got that name ... A cautionary warning to anyone doing research: check the family stories carefully. Quite often there are mistakes in people's memory!)

I found Sarah's baptism in the Port Royal Copy Register. It's difficult to reproduce the image here. According to the record she was born in Port Royal on August 21, 1832 and baptized by the Rev. T. Alves on October 28th. Her parents were James and Mary Huggins of Port Royal and she is described as being "of colour". She married Donald McDonald, a shoemaker of Port Royal and they had two daughters, Elizabeth and Mary. Donald apparently died shortly after the birth of the second child and Sarah remarried to my grandfather, Daniel Elias Brown. They had seven children, all born in Port Royal. Sarah died in 1898 in Kingston. Daniel had died seven years earlier.

Not much to go on, so why do I think that the book I found was hers? Well, based on one entry, by Robert Raw, dated 9th September 1867, I think it has to belong to her. Robert Raw was the Methodist minister in Port Royal between 1863 and 1868. He baptized three of Sarah's children: Sarah Letitia Webster in 1863, Richard Elias in 1866, and Bertha Rose (who was actually baptized Bertha Raw but seems to have changed her middle name) in 1868. At the time that Robert Raw wrote his verse in the book Sarah Letitia Brown was then pregnant with Bertha.

Why do I call it a commonplace book? Wikipedia defines "commonplace book" as "a way to compile knowledge, usually by writing information into books... Each commonplace book was unique in its creator's particular interests". In a way this little book reminds me of the autograph books I grew up with, where one would invite one's friends to write little verses or comments. The contents of this book reflect the literary interests of the Brown family and their friends and is a window into their lives.

In my next post I will go into more detail about the commonplace book and the people who wrote in it.

I've been remiss in updating my blog for the past month. I've been spending time working on a presentation for a recent conference, African Roots in Canada, organized by the Toronto Branch of the Ontario Genealogical Society in cooperation with the Ontario Black History Society and the Toronto Public Library. The conference took place last Saturday, August 9th, 2008, at the North York Central Library, and was well attended with about 75 people registered. My part in this first-time conference was a presentation on Researching Your Jamaican Ancestry from Canada. At the end of my presentation I showed slides of a few records from my Brown ancestry. It occurs to me that I wrote one post, back on April 1st, 2008, about the Browns, but never followed up on them even though I indicated I would. So I thought I might expand on the Brown family to the best of my ability, showing some of the records I've come across in my research.


As I wrote in the earlier post, the Brown family came from Port Royal. I do not know for sure exactly where they lived there, but it could have been on a street similar to this one. 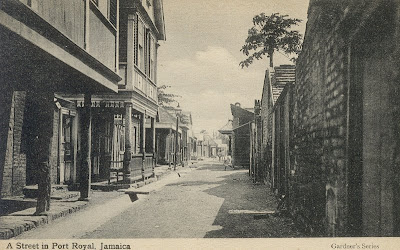 As I have already written, my great-grandfather, Daniel Elias Brown, was a shipwright, employed at the Port Royal Dockyard. I have not, so far, been able to find out much about his parents. He was born in Kingston 25 February 1827, on King Street, the son of Edward and Sarah Brown, and baptized on 3 May 1827. I have no further information on his parents, except that they had three other children, that I've found -- a daughter, Sarah Saunders Brown, born 24 December 1828 in Pink Lane, Kingston,and baptized in April 1828; another daughter, Eliza, born 9 May 1832 in Princes Street, Kingston, and a son, Jonas, born 25 August 1834, also in Princes Street. Both Eliza and Jonas were baptized 8 January 1837.

So, as I've indicated in my title, this is not just the story of the Brown family. Unable to find out more about Daniel's parents' origins, I moved to his wife's family. Daniel married a widow, Sarah Letitia McDonald. Sarah had married one Donald McDonald, a shoemaker in Port Royal, in 1851 in Port Royal. They were married in the Wesleyan Methodist Church by the Rev. William Tyson. This marriage record, part of the Dissenter Marriage Registers microfilmed by the Mormons, does not give the ages or names of parents of the parties, though it does indicate that permission was given for the bride to be married by her mother, "Mary Smith, surviving parent", whereas the groom was listed as being of "full age". By that we can deduce that Donald was over 21 and Sarah was not. Sarah's full name was given as Sarah Letitia Huggins, and I discovered in my research that her parents were James Vashon Huggins and Mary Goldson, both of Port Royal. By this time James Huggins was dead and Mary Huggins had remarried in 1845 to George Pitblade Smith.

Donald and Sarah had two daughters, Elizabeth Huggins McDonald, born 1852, and Mary Noel, born 1854. I have so far been unable to find a burial record in Port Royal for Donald McDonald, who must have died prior to 1858 when Sarah married Daniel Elias Brown. Here is the record of their marriage, from the Dissenter Marriage Registers for Port Royal:

This marriage also took place in the Wesleyan Methodist denomination; the officiating minister was the Rev. James Cox, another person who fits into my family research, though again, I have been unable to find out much about him except for a small entry in Philip Wright's Monumental Inscriptions of Jamaica, published by the Society of Genealogists in 1966. According to a mural tablet in the Wesley Church, Tower Street, "the Rev. James Cox died at Morant Bay, 30 May 1859, aged 55", apparently not too long after he married Daniel and Sarah. In corresponding with another Cox researcher I have learned that James Cox may have been born in Bermuda. He settled in Jamaica, married and fathered two sons that I know of: Theophilus Pugh Cox, born about 1844, who became the Headmaster of the Government Training College, Spanish Town, and Henry Martyn Hill Cox, born about 1845, who also became a Methodist minister. These brothers married two sisters, Mary Ann Barned and Lucinda Baker Barned, respectively.

Daniel, in marrying Sarah, took on her two daughters who would have been six and four years old, and not long after began a family of his own, seven children in all, six daughters and a son. All were born in Port Royal and baptized there in the Wesleyan Methodist church. I have written about some of them in previous posts -- Susan Saunders Brown who married John Cassis; my grandmother, Amanda, who married William Dey Smedmore; Bertha Rose who married Charles Percival Esterine and emigrated to New York; and Theresa Eugenie, who never married. It appears that, like the Smedmore family, the Brown family also left Port Royal at some point to settle in Kingston, since Daniel Elias Brown died there 7 April 1891, at 115 East Street. His death was registered by his daughter, Sarah Letitia Webster Brown, whose address was given as 49 Rose Lane, and that is where Sarah, Daniel's widow, died 25 July 1898. Perhaps Daniel and Sarah had lived at 115 East Street and after he died she went to live with her unmarried daughter, Sarah, who had been named after her.

In my next post I will pursue the story of Sarah Letitia Brown, my great-grandmother and her family history.