And now to the two youngest Smedmore boys, my uncles Lucius and Julian. My Uncle Lucius was born at 49 Beeston Street on 18 November 1899, the eighth child of William Dey Smedmore and his wife, Amanda. I have only one photograph of my Uncle Lucius, not a very good one ... probably a passport photo. Here it is: 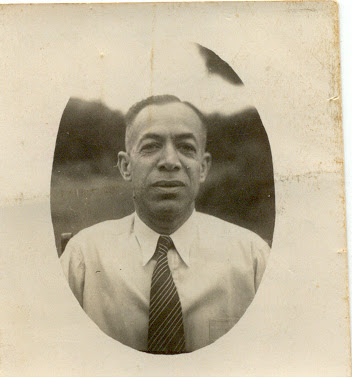 He had apparently sent the photo to his cousin, John Cassis in Toronto, as on the back of the picture he had written:


"This is a recent snap but I don't think the photographer has done me justice. You know, John, I was never half as ugly. Best love to Fanny, yourself and the family, from Maysie and self, Lucius".


Maysie was his wife ... more of that in a moment. My grandfather would have been sixty-three when Lucius was born, and sixty-seven when Julian, the youngest, was born four years later in 1902. It boggles the mind to think how difficult it must have been for these younger brothers to have a father who was old enough to be their grandfather. And when he died in 1914, Lucius would have been fifteen and Julian just eleven. I think they were probably brought up more by their older sisters and mother as my grandfather was not a well man in his latter years, suffering with serious migraine headaches which may well have been the pre-cursor of the cerebral haemorrhage which killed him. I remember my Uncle Rodney relating how they had to keep quiet most of the time because of his father's headaches. Rodney, apparently, loved to build things and was hammering together a chicken coop when told to stop because his father couldn't stand the noise. He was somewhat resentful about that, I remember.


But back to Lucius. Like other members of his family he was a Freemason, a member of St. John's Lodge, and he also worked for Henderson & Company, eventually becoming secretary of two of their sugar estates Orange Valley and Georges Valley in Trelawny. (When I visited Jamaica in 2003 I spent an afternoon at Orange Valley and saw the ruins of the old sugar factory and slave hospital. I also saw the paw-paw grove at Georges Valley. Paw-paw, aka papaya is now a popular export fruit.) Here is a picture of a section of the grove: 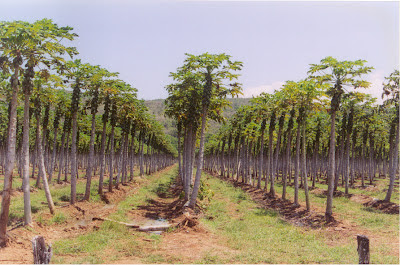 Lucius married quite young by Smedmore standards, when he was twenty-four, to Carrie May Burke, the daughter of Aubrey Mapletoft Burke and his wife, Amy Ann Depass. Maysie was three years younger than Lucius. From what I've been told there was some opposition to the marriage from Lucius's mother and two older sisters but he was determined to get married. The marriage was written up in the Jamaica Gleaner and was apparently considered quite the event of the season. Rodney was best man and Lucius's brothers, Owen and Julian, were ushers. The ceremony was performed by the then Bishop of Jamaica ... not surprising as Lucius, like all the Smedmores, was a pillar of the Kingston Parish Church and in fact was a member of the Parish Church Committee.
Lucius and Maysie had two daughters, Marjorie and Gloria, both of whom were quite a bit older than me so we were not very close as cousins. Unfortunately, the marriage ended in divorce in 1956, though they remained friendly and Lucius went to live with Marjorie and her husband, Eric Crawford on Trafalgar Road. It was there, in May of 1963, that Lucius was brutally murdered by a thief. He was alone at the time, as Eric and Marjorie had gone on a holiday to Mexico. The murderer was eventually caught, confessed, was tried and found guilty, and hanged. This event was a tragic one in the family. At the time my parents were visiting me and my family in Winnipeg where we were living, and it was a tremendous shock to them. Worse was to come later that year when my brother, Micky, died of a cerebral haemorrhage in October.

And now to my Uncle Julian, the youngest of the family, the apple of his eldest sister's eye, as I was told. He was different from the others, a very volatile person, someone who had strong likes and dislikes, and in fact, the only uncle that I ever had a falling-out with. He was quite the sportsman. He played cricket and was a member of several clubs. Unlike the others to the best of my knowledge, he did not become a Freemason, but he was a staunch member of the Kingston Parish Church and was a lay delegate to Synod for many years. He was always perfectly turned out in his dress and affected a very British accent, though he would, at times, lapse into Jamaican patois. He was known, affectionately, by family and friends as "The Count". 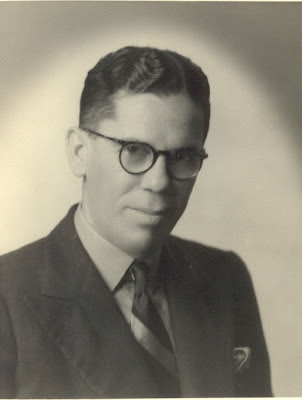 He married, somewhat late in life at age fifty, Enid Neilson, the daughter of the Reverend Christopher Charles Neilson, a Methodist minister. They were married in Lyndhurst Methodist Church in 1953 and the reception was held by my parents at 5 Holborn Road. To the best of my knowledge Julian continued to attend Kingston Parish Church while Enid remained a Methodist.
I mentioned having a falling-out with Julian. It was some months before my wedding in 1957. I had had an emergency appendectomy and was at home on sick leave, feeling rather sorry for myself, as my mother was in Toronto at the time visiting my brother and his wife and their new baby. I was invited by Julian's sister-in-law, Ruby, to visit her family in Morant Bay. Unfortunately, Julian had quarrelled with Ruby's husband, Edward, and he informed me that "no niece of mine will visit these people, since I have quarrelled with them". I wasn't about to take this interference in my life and we had a fierce quarrel and did not speak for almost six months. I seriously considered uninviting him to my wedding but cooler heads prevailed ... my mother told my I could not do that! ... and we made it up. For all his peculiarities he was a very affectionate uncle. He and Enid had a volatile relationship, but when she was struck with a massive stroke which left her unable to speak, he was devastated, even more so when she died shortly afterwards.
This is a photo of the two of them taken in happier times: 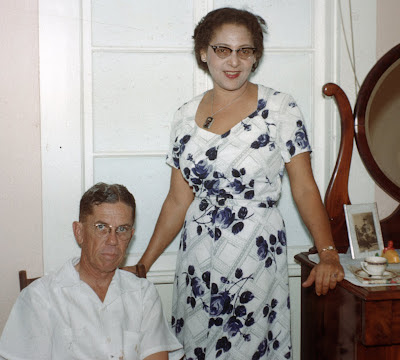 I have just returned from a wonderful twelve days in Newfoundland. I felt a real sense of belonging while I was in that rugged island. Perhaps it was the fact that I too came from an island and was going to another island, a unique place in this vast country. But, more than that, Jamaica and Newfoundland have much in common ... they gave us the cod which we make into our salt fish, and we gave them the rum, which they made into their Screech. The cod fishery in Newfoundland is no more, but that connection still remains.
But back to my uncles. The younger three, Rodney, Lucius and Julian, unlike their three older brothers, all married, two of them somewhat later in life. My Uncle Rodney was born in 1896, a little less than two years after my mother, and the two of them were very close. Rodney was both my godfather and my favourite uncle. 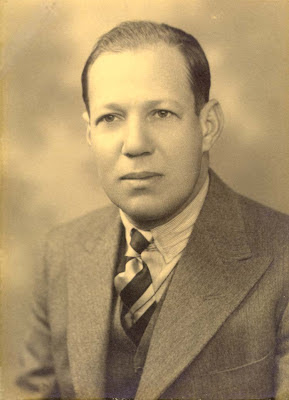 He was a sugar technologist by profession and this took him to various sugar estates on the island. Here is his entry from the 1940-46 Who's Who Jamaica: 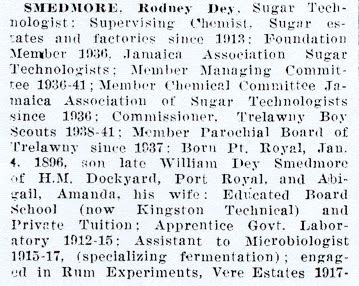 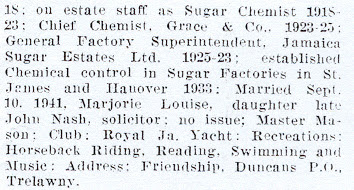 Before Rodney married Marjorie Nash he was engaged to be married to Olive May, a teacher at St. Hilda's Diocesan High School in Brown's Town. I remember meeting her once when she came with Rodney to our home at 5 Holborn Road , and I distinctly remember that she told my mother that she should send me to St. Hilda's when I was old enough to go to high school (I was then at the Cunningham's Preparatory School on Surbiton Road). The realization that this would mean leaving my home and my parents to go as a boarder far away in Brown's Town terrified me. Some time after that Rodney informed the family that his engagement had been broken off. My mother was quite upset about this for a while, whereas I felt an overwhelming sense of relief that I wouldn't be heading off to parts unknown to boarding school.
Looking back now, I see was that I was somewhat unfair to Olive May.Thanks to Donald Lindo I now know more about her and also have a couple pictures of her. She was born in Portsmouth, England, in 1917 and received her B.Sc in Mathematics from London University, as well as a Diploma in Education from the University of Hull. She came to Jamaica in the late 1930s and began her teaching career there at St. Hilda's. 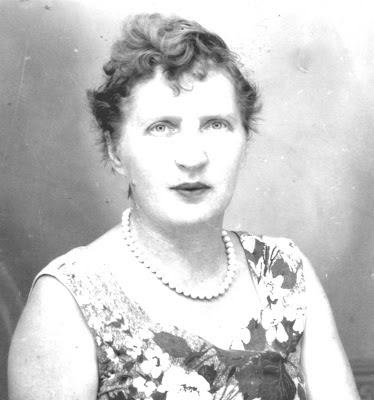 I don't know how she met Rodney ... he was probably working in the area at the time. It is unfortunate that their engagement did not last, and I never knew the reason why, but I rather think that the disparity in their ages and temperament may have had something to do with it. From what I've been told Olive was a lively and adventurous woman with a brilliant mathematical mind, but she was also twenty-one years younger than Rodney. I hope that they parted amicably. At any rate, Rodney married Marjorie Nash in September of 1941 in Sav-la Mar. I was a train-bearer at this event. Marjorie's sister, Hazel, was bridesmaid and my Uncle Owen was bestman. 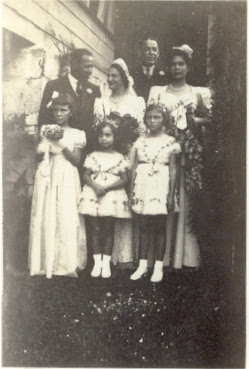 Here I am standing in front in the middle. I must say we all looked pretty solemn, except for the bride and groom who are looking lovingly at each other.

Olive May married Leslie Kensett, a British Army officer, in 1945. They returned to England, but the marriage was not a success and Olive came back to Jamaica where she resided until her death in 2000. She taught at St. Hugh's High School in Kingston, where she was much loved and was Head of the Math Department, until she left to go to Queen's High School for Girls in 1958 as Head of the Math Department there. She was universally loved by all her pupils and renowned as an excellent teacher. Looking back now I feel that she had my best interests at heart when she suggested I be sent to St. Hilda's, but I was only six at the time and didn't want to leave my family.
Rodney and Marjore were happily married for twenty-eight years until her premature death at age 59 in 1969. She had been a diabetic from her early twenties, as a result of which they had no children. I loved her dearly and still miss her. I plan to write more about both of them in future posts.
In my next post I'll write about my remaining Smedmore uncles, Lucius and Julian.
Posted by Dorothy Kew at 08:22 3 comments: