Finding Out About the Fords

In my last post I mentioned that I had found evidence in the Gleaner that James Dearmer Ford and his brother, Henry, came to Jamaica in 1840. This information was in Henry’s obituary in 1901 and is really the only evidence I have that the Ford brothers came from elsewhere. I assumed that they had most likely come from England and so my next step was to see what I could find out about them. The International Genealogical Index, known as the IGI, is an excellent Internet resource to get one started in finding out more about one’s ancestors. It is part of the FamilySearch website from the Church of Jesus Christ of Latter-day Saints, of which more in a moment. Since James Dearmer Ford had a rather unusual middle name I started with him. I knew, from the notice in the Gleaner, that he had died in 1881 at the age of 56, so armed with that information I searched the IGI and found his baptism, in 1825, in London, and that his parents were Thomas Ford and Jessey [sic] Maria. Further searching, using Thomas Ford and Jessey (or Jessy) as parents, brought up not only James but his brother Henry and other members of the family.


The IGI is only an index, created by the Church of Jesus Christ of Latter-day Saints (LDS), aka Mormons, as an aid to their members to perform their obligation to research five generations of their family, as part of their religious duties. The IGI includes records extracted from parish registers as well as records submitted by members of the church. It is therefore a good place to start, but one is advised to search for the original record if possible as there might be errors in transcription. Fortunately for me, a great many parish records for London are available on the subscription website, Ancestry, and that’s where I went to find out more about the family of Thomas Ford and his wife Jessy Maria.

Thomas Ford was born in 1802 in Bideford, Devon, the son of a John Ford. 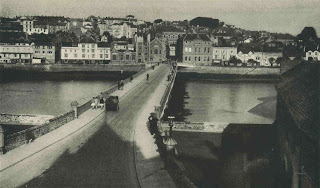 A view of Bideford showing the bridge over the River TorridgeCourtesy of Old UK Photos
At some point Thomas moved to where he met Jessy Maria Dearmer, who was born about 1804 in Hackney. They were married at ’s, Shoreditch, on 1 May 1824. 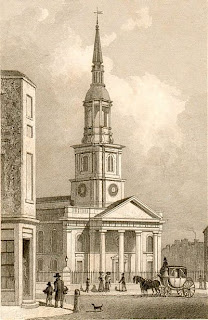 Thomas Ford seems to have tried his hand at various occupations. On the baptismal records for James and Henry he is listed respectively as a carpenter and a sawyer. By the time William comes along he is a clerk, and on Martha’s record, in 1838, he calls himself a timber merchant. By the time Albert is born Thomas is describing himself as a gentleman, but on Jessy’s baptismal record he has become a traveler, presumably a traveling salesman. It’s hard, therefore, to get a picture of how well-off the family was, but there must have been some reason for the two eldest boys, then aged fifteen and fourteen, to leave London and travel to a strange new country to seek their fortunes.

Why ? It’s entirely possible that Thomas Ford had a relative living there, but I have not been able to find any evidence to support that, though it is the most likely reason for the two boys to have chosen to go there. Another reason, however, is that the Jamaican government at that time was actively encouraging immigration to the island. Slavery had been abolished in 1834 but, in order to appease the planters, a system of apprenticeship for the freed slaves was put in place, so that in fact real emancipation did not come into being until August 1, 1838. It goes without saying that the freed slaves had no desire to continue working for their former slave owners and overseers, and in fact were happy to work their own little plots of land, being so encouraged by the Baptists who helped to set up various villages where former slaves could own and cultivate their own land. The Jamaican government, therefore, was forced to encourage immigration to the island to take the place of the former slave labour. Many schemes were put in place at this time, as per various Immigration Acts passed by the Assembly. The Government appointed an agent to recruit settlers to the island and immigration was encouraged from , and even the former American colonies. There is an excellent report on this on the Jamaican Family Search website at http://jamaicanfamilysearch.com/Samples/immig.htm.


As the only evidence I had for the Fords coming to in 1840 was Henry’s obituary in the Gleaner I did search to see whether the date was correct by searching for them in . The earliest nominal British census was taken in 1841.  I found the household of Thomas Ford in the 1841 census, in , Southwark. With them were Thomas Frederick and Martha Cleland. There was no sign of either James or Henry, nor could I find them anywhere in the English census records. Nor could I find any trace of William who would have been five years old.  He may have died, but I could not find a record to support that.  However, childhood mortality was high in those days, and sadly, Martha Cleland Ford and her as yet unborn brother, Albert Charles, were both dead by March 1843.
Whether or not James Dearmer Ford and his brother, Henry, were recruited to Jamaica, or else came at the behest of a relative there, is not known, but once there they apparently made a success of it, not on any plantation that I know of, but in the city of Kingston. 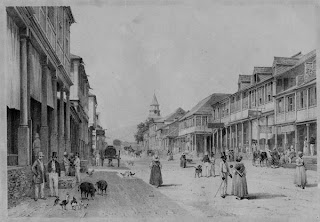 Kingston, Duperly, 1850
In my next post I shall describe how the two brothers made a successful life in .
﻿
Posted by Dorothy Kew at 14:36 1 comment: