My summer holiday would start the moment the car climbed the hill from Vale Royal up to the house at Friendship. Actually, there were two houses at Friendship. Uncle Rodney's house was at the top of the hill, and at the bottom of the hill was the Nash's house, where Len Nash, his wife Daphne (formerly Newman) and their three children, Dennis, Richard and Arlene, lived. Len Nash was an engineer at Vale Royal and first cousin of my Aunt Marjorie, Rodney's wife. I wish I had pictures of the two houses, because I find my memory is not as clear about what they were like inside as I would wish. Uncle Rodney's house was built up off the ground so that there was a sort of above-ground basement underneath where he had his office and made his various liqueurs (more of that later), as well as where the generator was installed. This was known merely as the Delco, and in fact I went through life for the longest time thinking that was what all generators were called. The Delco provided power when the electricity went off, as it often did.

I have a painting, given to me as a wedding present, and painted by yet another Nash, Sylvia Nash the artist, which immediately brings to mind the end of the property where I used to go and walk away over the rolling countryside, accompanied by the two dogs, Jill, a black Lab, and Bessie, a cairn terrier. Here is the picture. 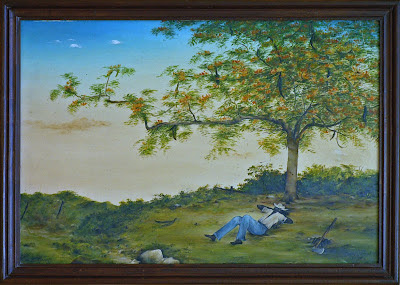 In my imagination just over that hill I would go off with Jill (Bessie being more of a house dog wouldn't go that far with us), and the two of us would walk along the paths by the cow ponds, where I would skip stones and Jill would go in for a swim. Finally, I would go back home ... Jill didn't always come with me, but would return at her leisure.

I remember a guinep tree on the property. The guinep tree (Melicoccus bijugatus) according to Olive Senior's Encyclopedia of Jamaican Heritage, is a large tree bearing small, round, green-skinned fruit which grow in clusters like grapes. Here is a picture of the fruit of the guinep:

The fruit is sweet and juicy with a seed in the middle and I remember, on one my visits to Friendship, gorging on them one day. That night I awoke feeling quite ill and proceeded to be very sick indeed, much to the disgust of my brother, Mickey, who was sharing a room with me at the time. (I don't recall why, but I guess my parents were also there and we had a full house.) I learned my lesson about eating too many guineps!
The highlight of my holiday at Friendship was going to the beach to swim. Not that I was a good swimmer, and it didn't help that Mickey used to duck me in the water. We went to Derby Beach (pronounced Darby), not far from Duncans. This was a lovely white sand beach with a gradual slope out into the sea. Here is a photo of my Aunt Marjorie at Derby Beach. 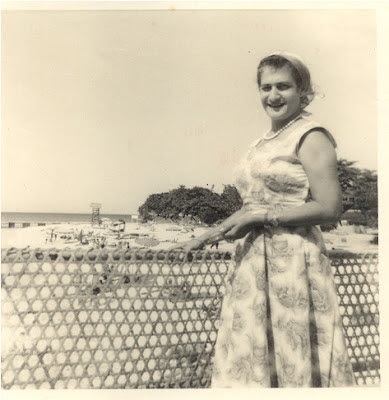 and one of Rodney, with the Burke family. 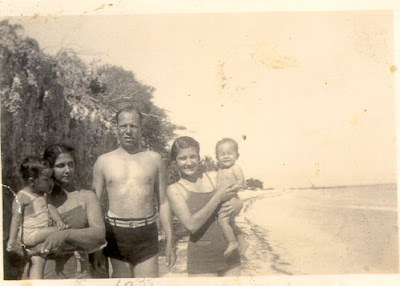 Derby Beach is now the famous resort, Silver Sands, and now looks like this: 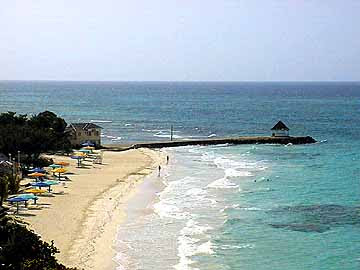 My Uncle Rodney was a sugar technologist at Vale Royal Estate and as a hobby he made the most wonderful liqueurs. He made a creme de cafe, a creme de cacao, and incredible orange liqueur and best of all, a pimento dram to die for! Pimento dram is made from the fruit of the Pimento or allspice (Pimenta dioca). Olive Senior in her Encyclopedia of Jamaican Heritage notes that the pimento is Jamaica's only indigenous spice. He never made a commercial venture of this hobby, but rather would bottle enough to give away each year as Christmas presents to friends and family. On one occasion he told me that he had been approached by Dr. Kenneth Evans who was also experimenting with a coffee liqueur, to invest in Dr. Evans's project. Rodney declined and Ken Evans went on to develop Tia Maria, and the rest is history!

Another one of my memories of Friendship is of Rodney's collection of books of Punch cartoons. He had bought them, I believe, from a bookseller on a trip to England, and I would spend hours going through them and reading all the cartoons by famous illustrators such as George DuMaurier. One of my all-time favourites is DuMaurier's cartoon, "True Humility", also known as The Curate's Egg. Who can forget the wonderful caption:

The Curate: "Oh no, My Lord, I assure you! Parts of it are excellent"

Sadly, Rodney had to get rid of all his Punch books due to an infestation of insects which ate their way through the books. To use an old Jamaican expression: "Chi-chi nyam it"

A Month in the Country

One of the pleasures that I looked forward to each summer holiday was going to spend a few weeks at Duncans, Trelawny, with my Uncle Rodney and Aunt Marjorie. They lived at a house on a hill, not far from Duncans, called "Friendship". My uncle, Rodney Smedmore, was a sugar technologist who had worked at various sugar estates in Jamaica. Some time after he got married he went to work for Arnold Muschett at Georgia and Vale Royal Estates in Trelawny. 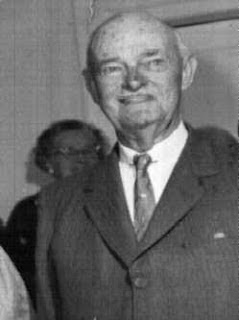 Arnold Muschett was born St. Elizabeth in 1882 and married Amy Houchen in 1909. Although they had no children they were both very involved in several charitable bequests for the children of the area including several scholarships, and they donated 25 acres of land for the erection of a school in Wakefield. My thanks to Donald Lindo for the photo and information about Mr. Muschett.
According to Inez Knibb Sibley's book, Dictionary of Place-Names in Jamaica (Kingston: Institue of Jamaica, 1978), Vale Royal in Trelawny consisted of a number of small estates including Georgia, as well as others that I'm not familiar with. 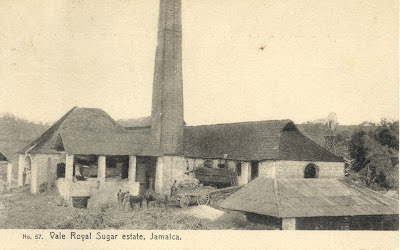 This old postcard of Vale Royal Estate probably dates from between 1910 and 1913. Uncle Rodney would also go quite often to Long Pond Estate, as well as Vale Royal and Georgia. The Great House at Georgia was very beautiful and we would often go to visit the Muschetts there.

My memories of how I actually travelled to Trelawny from St. Andrew are somewhat vague. Sometimes we went by car when Uncle Rodney came up to town to fetch me and we would drive the route from Kingston through Spanish Town and Bog Walk (over the scary Flat Bridge), 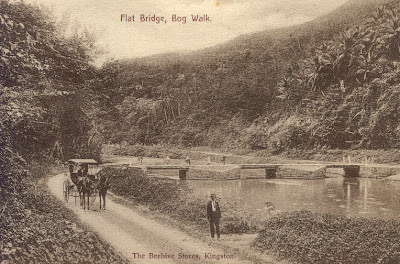 on to Linstead and Ewarton, over Mount Diablo... a steep, winding, narrow road over the mountain... then down through the green pastures of St. Ann through Moneague and Walkers Wood, towards Ocho Rios, then along the coast road through St. Ann's Bay, Runaway Bay, Rio Bueno,and then to Duncans. From there we climbed a hill on a marl road which eventually took us to "Friendship".

Once or twice, though, I would travel by train, probably accompanied by my mother. We would board the train in Kingston at the railway station 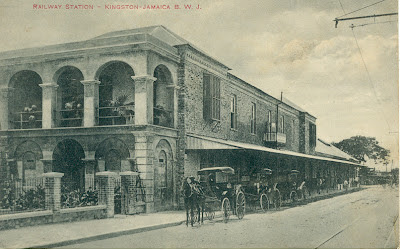 and then begin the exciting trip going through places with strange and exotic names -- Balaclava ... Maggotty ... Catadupa ... Montpelier ... Anchovy ... ending up at the station in Montego Bay. The train would probably have looked something like this: 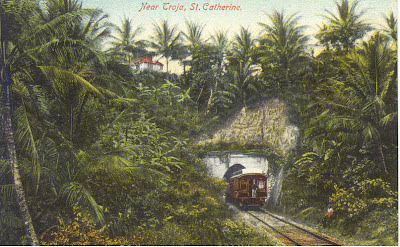 Olive Senior, in her excellent book, The Encyclopedia of Jamaican Heritage (Red Hills: Twin Guinep, 2003), reports that early travel on the train one way from Kingston to Montego Bay could take an entire day. I know that we always packed a lunch! By 1952 diesel rail service was instituted and the round trip between Kingston and Montego Bay could be done in a day. In September 1957 a horrendous accident on the railway line at Kendal caused the deaths of 175 people with 400 people injured. You can read about it at the Jamaica Gleaner's Pieces of the Past. Rail service was ended in 1992, after running for 150 years.

More often than not, however, we would travel by car. Going over Mount Diablo was the highlight of the trip. Since one could not see around the hairpin bends it was necessary to blow the horn loudly at every curve. All along the way we would pass vendors selling fruit 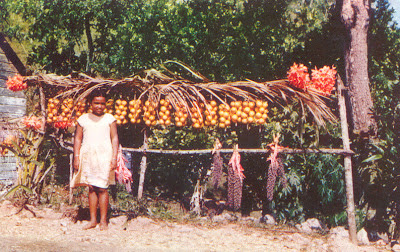 and we would stop to buy oranges and mangoes in season. I remember that my poor mother suffered terribly from car sickness and we had to stop a few times along the route when she felt ill.

But at last we would arrive at "Friendship" and the holiday would begin. Next time I'll write about what it was like to be in "the country" ... so different from my life at 5 Holborn Road.
Posted by Dorothy Kew at 14:25 17 comments: