More About My Aunts

Since my last post I've been doing some more thinking about my aunts Sylvia and Elma. My Aunt Elma never seemed happy. I don't have one photo of her smiling. For example, here's a photo I found among my mother's effects, after her death. It's of my Aunt Elma, my Uncle Rodney, my Uncle Julian, my mother and my father. I'm not sure where the picture was taken ... it may have been at Julian's house on Dumphries Road, or perhaps at 11 Dunrobin Avenue. 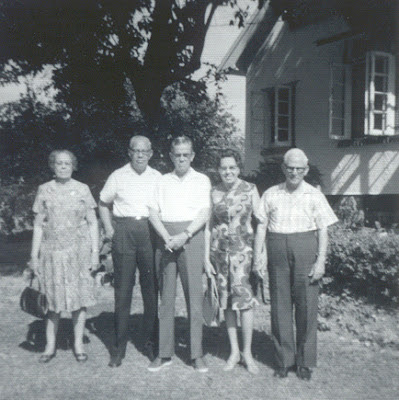 The thing that strikes me is how serious everyone is, except my mother! She's smiling, and that's how I remember her ... cheerful and happy. And, as you can see, no smile from Elma! I remember her as being somewhat stern, with very little sense of humour.

There's a family story about Elma and a higgler who came to 49 Beeston Street to sell fish. (The term, "higgler", an archaic one as Olive Senior describes it in her Encyclopedia of Jamaican Heritage, is used in Jamaica to denote market or street vendors of various products, agricultural and otherwise.) This event probably took place during the war or shortly thereafter. Elma was particularly abrupt with the fish man and he looked at her and said: "But what a way yu eye blue! Yu is a German?"

And that reminds me of another story about higglers, this time about my grandfather, William Dey Smedmore. When a higgler came to the house selling lobsters my grandfather was not content just to make sure that the lobster was alive and kicking. Oh no! He got the higgler to take out all the lobsters, put them on the piazza, and the one that moved the fastest was the one he bought!

But to go back to my aunts. My Aunt Sylvie always seemed a bit of an invalid. She was tall and thin and sort of tottered around. Most of the time she just sat while Elma took care of the running of the house, dealing with the maids, the shopping, the meals, and so on. Maybe it was because of having the responsibility of running 49 Beeston Street that made Elma unhappy. She probably did it while my grandmother was still alive, and no doubt afterwards, until they moved away to Dunrobin Avenue. 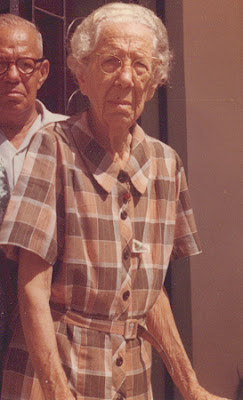 As for Aunt Sylvie, well she eventually just faded away, gave up walking and took to her bed ... a sad way to end one's life. Sadly too, Elma developed dementia in her old age. Dementia is a terrifying thing to contemplate in one's family. Besides my Aunt Elma, dementia affected my great-aunt, Aunt Tess who lived with our family at 5 Holborn Road and who eventually had to be hospitalized because she was apt to wander. 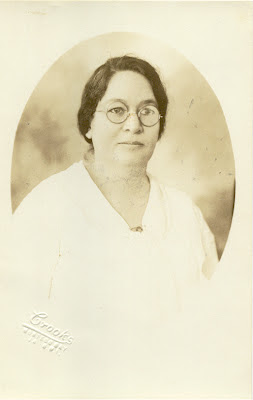 The sad part about it is that my Aunt Tess had a responsible position as Postmistress at Montego Bay for many years, where she made many friends. 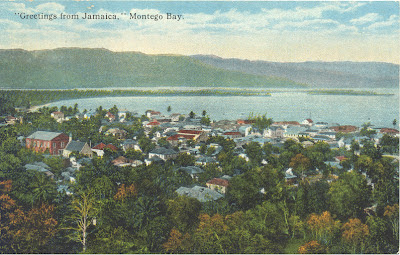 I found a few references to her in the Jamaica Gleaner online over several years. Apparently she had also been postmistress in Sav-la-Mar, Westmoreland, as a brief notice in the Gleaner of August 23, 1915 stated she was being transferred and that she was presented "with an address and purse by some of the leading residents of Westmoreland, among them being the Hon. W. A. S. Vickers, His Honour Mr. C. M. Calder and Mr. C. Lister Clarke."

Another item from the Gleaner of July 11, 1917, datelined Bog Walk, St. Catherine, mentioned that she had resumed her duties as local postmistress after an absence of five months. By 1928 she was in Montego Bay where she hosted a reception after the wedding of Miss Enid Sylvia Williams to Mr. Dudley Feith Wynter, at St. James Catholic Church. (I note that Father J. J. Becker, S.J. officiated at the ceremony and he was a very good friend of my Aunt Tess, who, though baptized in the Methodist church in Port Royal by William Parke Murray in 1874, had converted to Roman Catholicism in adulthood).

Aunts. We have aunts by blood (the sisters of our father or mother) and aunts by family (those who marry our uncles). In Jamaica we had a third kind of aunt and uncle ... any older couple who were good friends of the family, perhaps even distantly related. It was too formal to call them Mr. or Mrs. and we would never have dreamed of calling them their first names, and so we called them "Aunt" and "Uncle"
This post is about my real aunts, sisters of my father and mother. I had three: my aunts Sylvia and Elma Smedmore, my mother's older sisters, and my aunt Essie Levy, my father's sister, whom I never knew and of whom I'll write another time. My aunts Sylvia and Elma never married and lived at 49 Beeston Street until the house was sold in the fifties, at which time they moved with my Uncle Rodney and his wife, Marjorie, to 11 Dunrobin Avenue. As far as I was concerned, Sylvia and Elma were pretty old when I knew them. This picture of Elma, Sylvia and Rodney, must have been taken in the fifties or sixties. 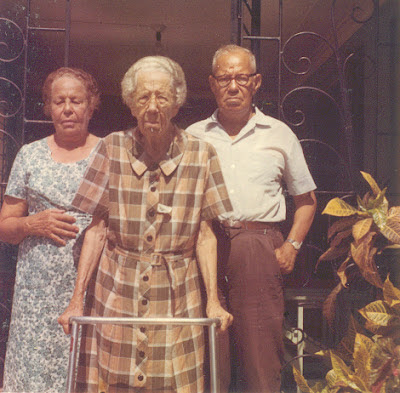 I imagine that looking into the bright sun is the reason they look rather grim!
It's hard, sometimes, to imagine one's elderly relatives as having been young themselves, so we're lucky when we find photographs of them when they were young. Here is a photo of a much younger Elma. 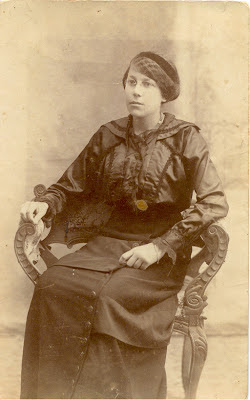 Elma was the fourth child in the family, born November 8, 1889, at 11 Fishers Row, Port Royal. While in Port Royal the Smedmores also lived at No. 2 Fishers Row, and No. 2 Sime Street. Now, I have been fortunate enough to obtain a postcard in Gardner's Series, of A Street in Port Royal, which I imagine is probably very much like the streets that the Smedmores lived on. 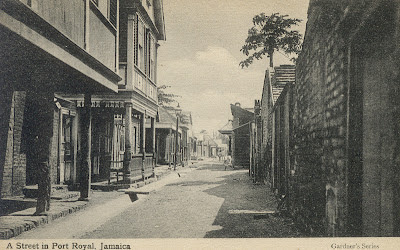 The houses on the left show the same Georgian style of architecture as the house at 49 Beeston Street.

Elma was always somewhat serious and somewhat strict as I remember her. My mother claimed that she did have at least one suitor who wanted to marry her but she refused him. I have no idea who that might have been.

Sylvia was the eldest child, born January 20, 1884, at No. 2 Sime Street in Port Royal. I never found any early photographs of her among the family pictures, but some time ago I made contact with the granddaughter of my father's sister, Essie. Cheryl lives in Oklahoma and she sent me a package of photos, many of which, unfortunately, neither of us could identify. There is one which might be of Sylvia as a young woman. The picture was definitely taken in Kingston, Jamaica. On the front left corner of the picture is the word "Cleary's", and on the right corner "Fine Art Studio, Kingston, Ja." On the back is the photographer's name, "J. W. Cleary, Kingston, Jamaica". I sent a scan of the photo with the stamps to Donald Lindo in Jamaica and he forwarded it to David Boxer, Director Emeritus and Chief Curator of the National Gallery of Jamaica. He very kindly wrote me to say that he would date the photo between 1900 and 1910, before the firm became Cleary and Elliott, one of the best known photography studios in Jamaica. 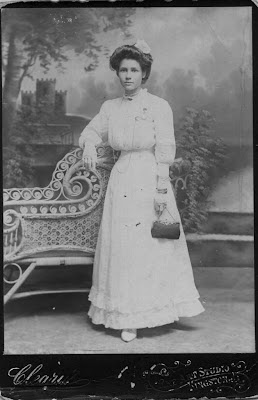 So, is it my Aunt Sylvia? I don't know ... it could be, and it's a nice picture. I like to think that it is her photo, as my actual memories of her are of an elderly, tall, thin, somewhat tottery old lady who never seemed to be in very good health. Perhaps that's the reason she looks somewhat unhappy in later pictures. She died July 19, 1970, at Dunrobin Avenue. She was eighty-six years old. Her sister, Elma, died eight years later,at the age of eighty-nine.
Posted by Dorothy Kew at 10:57 2 comments: