My Other Grandfather -- William Dey Smedmore

Having just about given up on finding out more about my elusive grandfather, Leopold Levy, I’ve decided to move to my maternal grandfather, William Dey Smedmore … not that’s he’s any easier to research. I have no idea who his father was, and only hearsay evidence as to the identity of his mother. I’ll explain why in a moment, but suffice it to say, I do at least know a great deal more about him than my other grandfather, thanks to the stories I’ve collected from my mother and her siblings over the years. I’ve also been able to find a few records pertaining to him as well as items about him in the Jamaica Gleaner.


My mother’s family lived in Port Royal. My maternal grandmother, Amanda Brown’s family had deep roots there and it’s where my grandfather, William Dey Smedmore, was born. 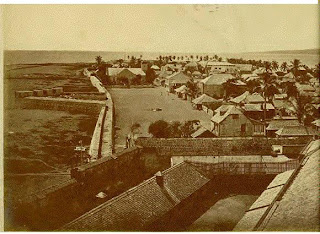 This is a view of Port Royal about 1890, showing the church and town, looking west towards the entrance to .  The town’s heyday was in the seventeenth century when it served as headquarters for the buccaneers who pillaged the , but all that came to an end with the disastrous earthquake of 1692 when more than half of the town was swallowed up by the sea. What remained was a small fishing village with a naval station and dockyard, but even that would pass away. By 1881 the population was 1205, exclusive of shipping. According to Michael Pawson and David Buisseret in their book, (1975):
"By [1900] 's days as a naval base were numbered. The later nineteenth century had seen the rise of the so-called 'blue water school' of British imperial strategists, advocating very powerful fleets operating out of the United Kingdom, supported by a small number of strongly-fortified bases.  The yard was too small to rank as one of these, and so in 1905, following the reorganization directed by Admiral Sir John Fisher, her last  commodore, F.W. Fisher, hauled down his flag."
My grandfather, William Smedmore, was employed at the Dockyard as an Admiralty writer, but seems to have retired some time between 1896 and 1899 when the family removed to Kingston.

The image below is of the baptismal record for my grandfather, William Dey Smedmore. As you can see, no parents are named in this record, a clear sign that he was illegitimate. For reasons that are highly frustrating to Jamaican researchers, there is a period of time in the baptismal records where many Anglican priests would not record the names of either parent if the child was born out of wedlock. Some would (very few), and some would at least record the mother’s name. Curiously, the very early registers prior to 1825 recorded all this information, including the fact that the parents were not married, but not so by the 1830s.

William Dey Smedmore … and no one can figure out where the name “Dey” came from … was born 29th October 1836, and baptized on 1st January, 1837. On June 20th of that same year ascended to the British throne. My grandfather, from all that I’ve learned about him, was a Victorian paterfamilias through and through. He appears to have ruled his family in strict Victorian style and was much loved and feared by his nine children, who called him Papa.  His word was law, and no one defied it. All of the children lived at home after they moved to from . None of those who married did so before his death, and even the eldest son, Victor, who went to to enlist in the Army in the First World War, waited till 1915 after his father had been dead for over a year.
I know very little of my grandfather’s life between his baptism and his marriage to Amanda Brown in 1882. It was my mother who told me, when I was about fifteen, that my grandfather was illegitimate.  I was warned on pain of death not to let on to my two aunts, Sylvia and Elma, that I knew this. According to my mother, William Dey Smedmore was the son of an English sailor and a woman of by the name of Ann Wood. When I began my family history research I searched the Port Royal baptismal records and did find a baptism for an Ann Wood, born in 2 February, 1811 and baptized 12 October 1813.

Assuming this is my Ann Wood she was the illegitimate daughter of a slave owner and vestryman named John Owen Wood. Her mother was one Mary Holms. I cannot, however, prove that she was the mother of William Smedmore. If she were, then she would have been 25 years old when he was born. I have not so far been able to find out anything more about her … whether she married, or when she died.  My mother told me that her father had been brought up by two aunts, but I have no evidence for this and do not even know who they could have been. Indeed, his birth is a mystery!
I found one more mystery surrounding my grandfather. Purely by chance I came across a birth record in Port Royal for one Dorothy Priscilla Theodosia Smedmore, the daughter of an Elizabeth Handfield, born 6 July 1879. No father is named in the record. Could this have been an illegitimate child of William Dey Smedmore? I know of no other Smedmores apart from my mother’s family. This child was born before the marriage of my grandfather. One thing is certain … no member of the family ever mentioned this child and I’m inclined to think that they knew nothing about this, assuming again, that this was my grandfather’s child.

In my next post I’ll continue the story of William Dey Smedmore.