Stephen Hopwood pointed me towards the website of the National Library of Jamaica where I found a picture of the Commercial Rooms, at Harbour and King Streets, where Louis Cunha had worked early in his career. Here it is: 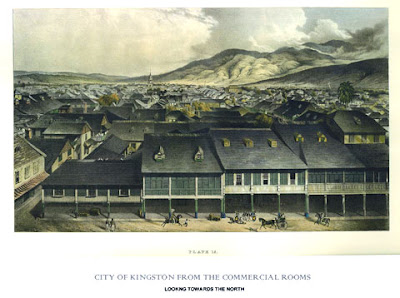 The artist was Joseph Bartholomew Kidd, who was born in Edinburgh in 1808 and died at Greenwich in 1889. Between 1831 and 1833 Kidd was engaged by John James Audubon to copy many of his watercolours of birds, Audubon at that time being very involved in finding subscribers for his Birds of America. One such work by Kidd is The Baltimore Oriole.
Kidd also spent time in Jamaica between 1833 and 1840 where he painted many island scenes. Other examples of his work can be found on the website of the National Library of Jamaica, which is currently under construction.
After Louis Cunha dissolved his partnership with Casper Davis in 1879 he continued his operation of the Commercial Exchange. At some point it seems that the Commercial Exchange, or “Commercial Rooms” as they were also known, became the Merchants’ Exchange. In 1885 the Merchants’ Exchange was amalgamated with the newly formed Jamaica Society of Agriculture and Commerce, but by it’s probable that by this time Louis had retired.
Louis and his wife, Elizabeth had six children: Emmeline Isilda, Reginald Granville, Herbert Augustus, Clarence Louis, Percival Charles and Olive Mosse – four sons with two daughters as bookends! All seven were baptized in the Wesleyan Methodist Church, but only Herbert and Clarence were married in that church. They would have been members of Coke Chapel in Kingston.

Coke Chapel was destroyed by the earthquake in 1907 and the current Coke Methodist Church was built on the same site. 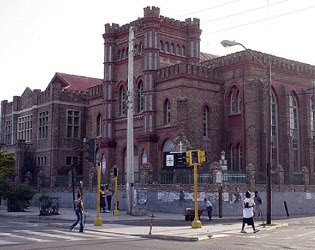 Gleaner, Pieces of the Past www.jamaica-gleaner.com/pages/history/images/

Emmeline married Frederick Augustus Autey, a merchant and proprietor of Autey & Company, with operations in both Kingston and Port Antonio. When they married in 1871 Emmeline was twenty-four and Autey was forty-two and a widower, his first wife, Esther Ramos, having died in 1869 at age thirty-three. Autey and Emmeline might have met through Emmeline’s younger brother, Clarence who is listed in the 1878 Directory for Kingston as an accountant with the firm of Autey & Co. at 119 Luke Lane. Autey himself died “of old age” in 1905 and I haven’t so far found any further reference to his widow, Emmeline.
Reginald Granville, the eldest son, married Isabel Martinez Trincoso in Colombia, according to a brief notice in the Gleaner, and I know nothing further about him. Nor have I been able so far to find out what happened to Olive Mosse Cunha, the youngest of Louis’s children. I have been more successful in tracing the lives and careers of Herbert, Clarence and Percival, all of whom I hope to write about in this blog. I found a curious item in the Gleaner of June 20, 1866 about one of Louis’s sons, though which I’m not sure. It might be the youngest, Percival. Here it is: 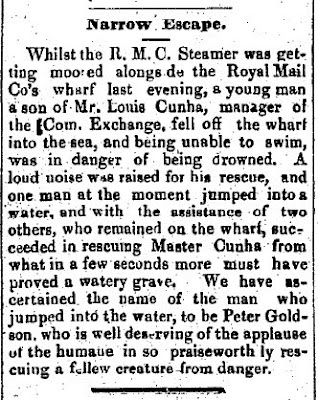 Louis Cunha died on December 1, 1893 at his home, 136 Church Street, Kingston. Cause of death was chronic cerebritis -- inflammation of the brain. The Gleaner published a brief obituary about him. 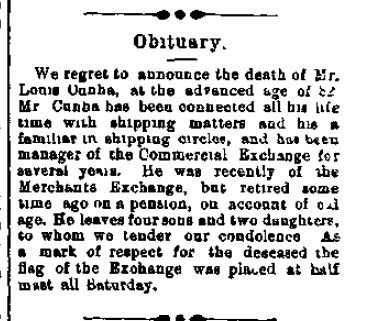 His wife, Elizabeth, had already passed away on June 14th, 1884, most likely of uterine cancer.

In my next post I’ll continue the story of the Cunha family.
Posted by Dorothy Kew at 17:03 1 comment: