My Grandfather Leopold -- Still a Mystery!

Okay, I know what you must all be thinking! Why have I waited so long to get another blog post up? To be honest, I’ve been bitterly disappointed by my inability to find out more about my elusive grandfather, Leopold Levy. As I reported in my last post, I thought I had found his birth and the marriage of his parents. The Leopold Levy I found … indeed the only one who showed up in the birth indexes for Strasbourg for the right time period … was born 6 December 1846 to Benjamin Levy and his wife, Marie Ann Bloch, at 115 Grand’ rue, Bas Rhin, Strasbourg. This fitted with what I knew about him so far, but in order to confirm that what I had found was correct, I really needed another piece of the puzzle – his marriage record which would most likely give the name of his father.

According to the notice in the Gleaner of Friday, July 23, 1886, Leopold and my grandmother, Alice Rodrigues Da Costa, had been married in Colon by the Registrar on 16 July of that year. All attempts so far – with help from others – to find a record of this marriage have been in vain. It is not clear whether the record is in Colon, Panama, or in Colombia, since Panama in 1886 would have been a province of Colombia. I have two documents which show that Leopold was in Colon. One is the birth record for his eldest child, Daisy, who was born in Kingston two months after the marriage, so presumably Alice returned to Jamaica as soon as she could after the marriage, but, one assumes, without Leopold.

Leopold’s occupation is given as merchant and his place of residence as . One other document I have – thanks to another researcher, Jacky Paul Bentzinger of , – refers to Leopold as a shopkeeper in . It is on a page in French from a business ledger where his name is listed along with other French business people who had apparently suffered losses because of a fire. Other occupations listed on the page are of the manager of a section of the French Canal Company, and of an agent of the same. Leopold’s loss in francs appears to be 2363.00 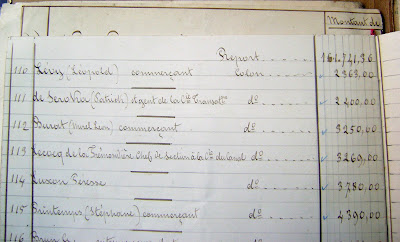 There is no date on this ledger and that is all I have about him in Colon!


The reason he is still a mystery is that since my research into his supposed birth in Strasbourg I have found evidence on line which shows that the Leopold Levy I found cannot possibly be my grandfather! While trolling on Ancestry I came across two records for a Leopold Levy, born 6 December 1846. Here is the first one: 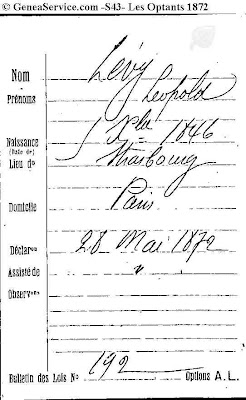 This is a record of a Leopold Levy, born 6 December 1846 in , who opted to become a French citizen on 28 May 1872. A little background here -- having won the Franco-Prussian War, annexed the French departments of Bas-Rhin, Haut-Rhin, Moselle, a third of Meurthe, and some of . The Treaty of Frankfort contained a provision for French citizens of the region to retain their nationality and to be allowed to move to . Many of the Jews of Alsace did this, becoming, in effect, refugees from their homeland as they had to leave . Now, this particular record might indeed refer to my Leopold, since I have no idea when he would have immigrated from or to the . However, the second document completely destroyed my research! Here it is: 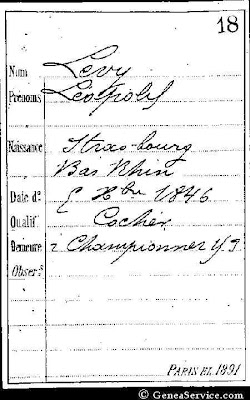 This is a record from the Electoral Rolls of Paris in 1891. It shows the same Leopold Levy, the optant, born 6 December 1846, now living in Paris, at 2 Championner, and his occupation is given as “cocher”, i.e. coach driver. This cannot be my grandfather, who, when his fourth child, Essie Gertrude Levy, was born 30 March 1891, was at that time an accountant in Port-au-Prince, Haiti.

All that research – for naught! The Leopold Levy born in 1846 in Strasbourg could not possibly be my grandfather. And that is why I need to have his marriage record, assuming that one exists, in the faint hope that it would give his parents’ names and once and for all confirm who he was, and where and when he was born.


I gave my previous post the caption – “A Cautionary Tale”. One cannot jump to conclusions based on one or two pieces of evidence. Genealogical research requires more than that to confirm one’s conclusions. I am missing the most crucial piece of information which might indeed settle once and for all the identity of my elusive grandfather!
Posted by Dorothy Kew at 17:41 1 comment: