Finding Leopold -- But Did I? A Cautionary Tale 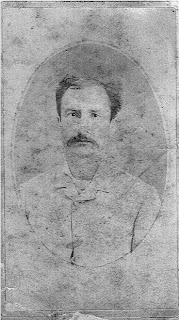 It’s been several months since my last post, about my elusive grandfather, Leopold Levy. I apologize for the delay which in many ways mirrors the difficulty and frustration I have experienced in trying to discover more about him. At one point I thought I had indeed found out who he was and where he came from, and then other information surfaced and now I’m once again unsure … This is why I call this a cautionary tale because so often we think we’ve found the records we need to round out our genealogical research and then something else comes along which throws a spanner in the works.

In my previous post I said that I had found an item in the Gleaner which set me on the trail. This was his death notice in the Gleaner of March 5, 1917. Up to this point I didn’t even know when he had died. All I had been told was that he died in Havana, Cuba. Well, even this was incorrect! 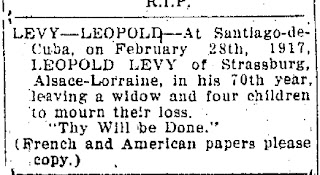 Leopold had died in all right, but in Santiago-de-Cuba, on the south coast of the island, west of , and nowhere near , which is on the north coast. Santiago-de-Cuba would have been much closer to for purposes of travel. The notice, which I assume was placed by his widow, Alice, indicated that he had been born in , and that he was 69 years old. Based on this information, then, my next task was to search for the birth of a Leopold Levy in the birth indexes for . These records, fortunately, had been microfilmed by the LDS.  I assumed a birth date for Leopold of approximately 1848 and that is where I began.
I was to discover later that the name Leopold Levy is fairly common, but my search in the microfilm turned up just one that seemed the most likely … even though the birth date given was 5 December 1846. This Leopold Levy was the son of one Benjamin Levy and his wife, Marie Anne Bloch. 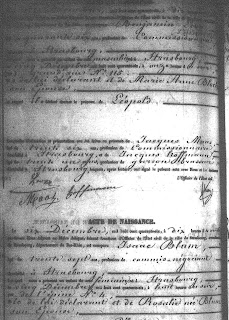 The record, of course, was in French, as follows:


I then went looking for a marriage record for Benjamin Levy and Marie Anne Bloch. I was hoping that there might be a further clue in the names of their parents which might tie them to Alice’s and Leopold’s children. So far, I had found no such naming patterns. I did find a marriage record for them as follows:
ACTE DE MARIAGE

One thing I’ll say for French records … they are indeed comprehensive! The above record told me that Benjamin Levy had been previously married to Barbe Stuffel, who had died 2 February 1840, that he was the son of Juda Levy, a peddler, who had died 19 September 1826, and his wife, Agathe Mayer, who had died 23 May 1822. Benjamin married Anne Marie Bloch 11 October 1842, and she was the legitimate child of Simon Bloch, a tinker, and his wife, Rosine Dreyfuss.


Assuming all this was indeed correct it really didn’t give me any clue as to how Leopold got to the . His origins appeared to be humble, yet I had been told that my grandfather could speak about seven or eight languages.  He would have spoken French and probably German or Yiddish, and he obviously spoke English and must have been able to converse in Spanish as he spent time in , and . As I mentioned in my previous post, the family claimed he was an oculist, though I never found that term applied to him. He was, according to the records I found, a book-keeper, a merchant, a clerk … but still an educated man. This didn’t seem to fit with the humble background I had found. What I really needed, of course, was to see his marriage record, which hopefully would give his father’s name. As for how he got to the … again I was unable to find any record through Ancestry for a passport issued to him.  So, the question remained … did I have the right Leopold Levy? As I said at the beginning … this is a cautionary tale and in my next post you will see why.
Posted by Dorothy Kew at 13:07 No comments: