It's been quite a while since my last post ... other stuff gets in the way ... At any rate I wanted to return to my research on the Da Costa family and talk about how I went in search of them and what I found. It wasn't at all straightforward. Sometimes genealogical research can be very fruitful -- other times not!

The record states that Melbourne Da Costa, age 23, bachelor, small trader, son of Jacob Rodrigues Da Costa, married Abigail de Souza, spinster, dressmaker, age 22, daughter of Joseph Desouza, on the 24th of May, 1882, and that the marriage was performed in Kingston by Alexander Robb.The names of the two witnesses are almost illegible; one appears to be Wm. M. Holland. Further research on my part showed that Alexander Robb was a Presbyterian minister. Whether or not they were married in a church was not stated and I'm inclined to think that the marriage probably took place in a home, perhaps the bride's home. Certainly the bride wore a wedding dress. My cousin, Kay, Melbourne's great granddaughter, sent me this photo of Abigail. 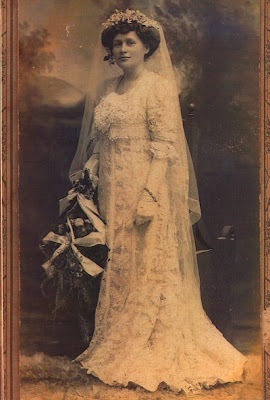 Unfortunately, we don't have a photo of Melbourne.

I discovered that the DeSouza family was Jewish, and later on I was able to confirm the fact that Melbourne had been baptized in the Catholic church. Now, I have come across marriages between Catholics and non-Catholics that were performed in the Catholic church, so long as the non-Catholic partner promised to bring up the children as Catholic. But Abigail had no such intentions, and indeed all their children were brought up Jewish and named in the synagogue records.

In looking back at the notes I made at the time I see that I wasn't sure that Melbourne, the son of Jacob Rodrigues Da Costa, was my grandmother's brother, because I didn't know her father's name! Alice did not get married in Jamaica, but in Colon. I discovered that later when I was sent a copy of the Gleaner notice of the marriage. I naturally first concentrated on my grandmother's family and found the births of all her children, whose names I did know. An interesting fact started to appear in some of the registrations. (There were seven births, and three deaths.) Two of the births (those of Daisy and my father, Michael), and two deaths (Daisy and Lucien) were registered by Selina Rodrigues Da Costa who, on Lucien's death record in 1887, described herself as "grandmother".

Selina DaCosta is described as a widow in this record, so the next step was to find out more about her late husband, Jacob Rodrigues Da Costa.

And here I'd like to digress and go into my favourite genealogy gripe or whine ... all this would have been so much easier if I had had access to census records in Jamaica! The census is a wonderful genealogy resource -- it places the whole family together in one place at one time. In England and Canada it was taken every ten years on the ones, beginning in 1841. (In Ontario the nominal census, where everyone in the household is named, begins in 1851.) In the United States censuses go back even further and are taken in years ending in zero. The U.S has released censuses up to 1930; in the United Kingdom they are available up to 1901 and in Canada up to 1911. There are no nominal censuses of this nature for Jamaica! A few censuses exist, mainly early ones, but mostly what censuses exist are purely statistical in nature. Madeleine Mitchell, in the revised editon of her book, Jamaican Ancestry: how to find out more (Heritage Books, 2008), reports that censuses were taken, but that the schedules with household names do not appear to exist. Jamaican genealogists would kill to have those censuses!

In the mean time I was fortunate enough, thanks to a good friend, Dr. Anthony MacFarlane, a convert to Judaism, to get hold of copies of the records of the two synagogues in Jamaica, the Spanish and Portuguese synagogue (Sephardic) and the English and German Jews synagogue (Ashkenazi). In searching through I found a Jacob Rodrigues Da Costa, son of Joseph Rodrigues Da Costa and his wife, Esther Lazarus, who was born 12 October 1821, and who died 19 November 1871. This Jacob was buried in the Jewish cemetery. Was he the husband of Selina Da Costa? I searched for a marriage but without success. Nothing showed up in the Jewish records, the Church of England parish records, nor in the Dissenter marriage records. That left one possibility. Since both Melbourne and Alice were apparently Catholic then maybe Jacob and Selina were married in the Catholic church. However, the Catholic records have not been microfilmed by the LDS, so my only recourse at that time was to seek the help of the Archivist of the Archdiocese in Kingston, Father Gerry McLaughlin.

In my next post I'll continue with the saga of the Da Costa reseach.