Musings and Memories of This and That

It's been quite a while since my last post, which was way back in early November. Wow! How time flies when you're busy doing other things. What things, you may ask? Well for one thing, I have taken on a volunteer position with my local genealogical society, the Halton Peel Branch of the Ontario Genealogical Society. I've had various positions on the HP Executive for quite a while -- as Awards Co-ordinator, Chairperson, Past Chairperson, Programme Co-ordinator -- and now I'm Cemetery Co-ordinator. One of the aims of the Ontario Genealogical Society is to locate and transcribe all known cemeteries in Ontario. Transcribing cemeteries is done by a team of volunteers who painstakingly record what is inscribed on the tombstones. With the advent of digital photography many branches are now compiling both a visual and written record of the cemeteries in their area. More that 6,000 cemeteries have been located in this province, and over 5,700 have been transcribed by the thirty branches of the OGS. Halton Peel Branch still has some cemeteries to be recorded, as well as recorded cemeteries to be published.
Why transcribe cemeteries anyway? Well, not only is it one way to preserve our heritage, but it is also extremely helpful to people engaged in genealogical research. Quite often a cemetery transcription may be the only record one finds of an early ancestor. Unfortunately, with a few exceptions, there appears to be no genealogical group in Jamaica doing this. There are all sorts of cemeteries in the island, many of which have fallen into disrepair and neglect, and few that have been entirely recorded. I am proud to say that much has been done to record our Jewish cemeteries on the island. I refer to the work of the late Jacob A. P. M. Andrade, whose book, A Record of the Jews in Jamaica from the English Conquest to the Present Time, contains transcriptions of the various Jewish cemeteries in the island. Unfortunately, the book, published in 1941, is out of print, but the cemetery records can be found on a subscription website, Jamaican Family Search. Another excellent book is that of Richard Barnett and Philip Wright -- The Jews of Jamaica: tombstone inscriptions, 1663-1880, which incorporates much of Andrade's work. And a new book has just been published, on the Hunt's Bay Cemetery, the oldest Jewish cemetery in Jamaica. This is The Knell of Parting Day, by Marilyn Delevante, who worked diligently to preserve this neglected cemetery. 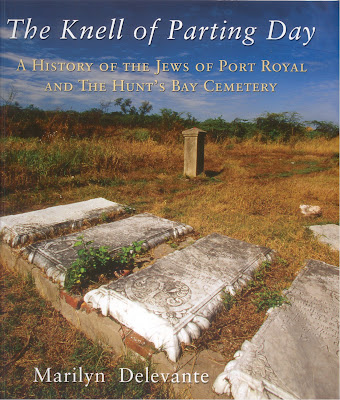 It's a beautifully illustrated book and you can find out more about it at the Jews of Jamaica website.
Would that we had done more for the church and public cemeteries in Jamaica! Some work has been done by individuals on early monumental inscriptions, such as that by James Henry Lawrence-Archer in his book, Monumental Inscriptions of the British West Indies from the earliest date (1875) This has been transcribed by Patricia Jackson and is posted on her subscription website Jamaican Family Search. Another work is that of Philip Wright, Monumental Inscriptions of Jamaica (1966). Both of these books are currently out of print but have also been microfilmed by the Church of Jesus Christ of Latter-day Saints (LDS), aka Mormons and can be found in their library catalogue on the FamilySearch website. Most of the inscriptions recorded are mainly of Anglican churches. I know of no efforts made to record Catholic or public cemeteries.
One of the largest nondenominational cemeteries is the May Pen Cemetery, in Kingston, pictured below. 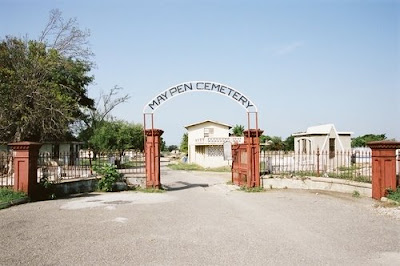 This cemetery, one of the oldest public cemeteries, has become very rundown and neglected, but efforts have been made within the past two years at cleaning it up. As far as I know this cemetery has not been recorded.

Madeleine Mitchell, in her book, Jamaican Ancestry: how to find out more (2008) comments on how dilapidated the various cemeteries of the island have become. Stones are almost illegible, cemetery plots are overgrown, and it's not unusual for people to take up residence in the cemetery or to allow their animals to graze there! Such, I understand, has been the case with the cemetery of the Kingston Parish Church 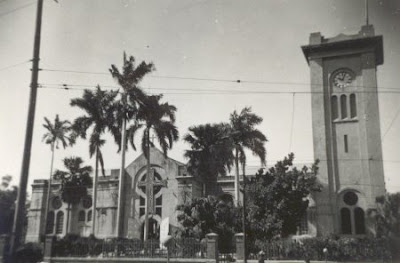 where higglers have set up shop. Similarly, I am told one should not wander through the churchyard of St. Andrew Parish Church, Half-way Tree without an escort! 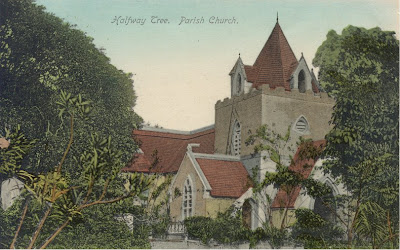 Donald Lindo has collected over 7000 burial records of St. Andrew Parish Church covering 1657 to 2000, and these can be found on his CD, Genealogy of Jamaica, 2006. Thanks also to Donald I have a photograph of the grave of my Great uncle, Joseph Rodrigues Da Costa, who is buried in Calvary Roman Catholic Cemetery. 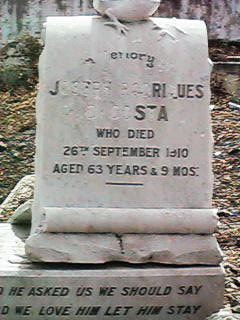 I wish there was a genealogical society in Jamaica which would take on the job of recording our cemeteries before they are all completely lost!

Before I close, I would like to mention that my blog has received an award from another blogger, Jacqueline Smith, who also writes a Jamaican blog, Jack Mandora's, a book-lover's nook. The award is the Arte y Pico Award, and I display it here with pride! Thanks, Jacqueline!