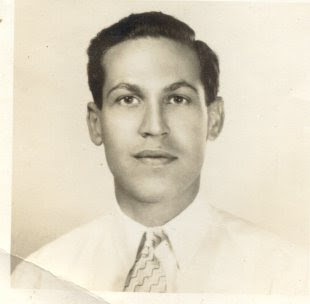 If he had lived, my brother Micky would have been eighty-one years old today. Sadly, he died far too young, at thirty-six, leaving a wife and three very young children. This post is dedicated to his memory.
My parents, Michael Leopold Levy and Maud Dey Smedmore, were married April 27, 1926. A year later, April 2, 1927, their eldest child, a son, was born and christened Michael Owen Dey Levy, but known by everyone as Micky. He was the first nephew and grandchild in the family. Although my mother was one of nine Smedmore children, and my father, Michael, was one of seven, their generation had not proved as fruitful. Only two of the Smedmores were married by 1927 -- my uncle Lucius, who had two daughters, and my mother. Two Smedmore men, Rodney and Julian would marry eventually but they had no children. Micky, therefore, occupied a unique place as the first boy in that generation. Here he is with his mother, probably at their first house on Anderson Road: 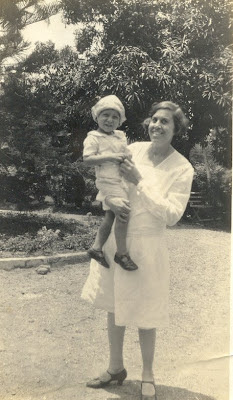 My mother kept his hair long till he was about two years old, a fact he hated to be reminded of. Here he is again, sitting on the steps of the house at Anderson Road. 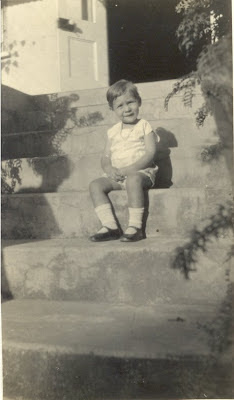 My mother did not get pregnant again until Micky was about six, so he was the only child for quite a while and, according to my mother, quite spoilt by his aunts and uncles. My mother had a miscarriage, which was a great disappointment to her, and then shortly after became pregnant with me and I was born at the end of May in 1935, by which time Micky was eight years old. He had been the favourite of my great aunt, Tess, but when I came along Aunt Tess turned all her attention to the new baby and "Micky's nose was out of joint", as my mother put it. This was her explanation for why we were not close as brother and sister, but I think the difference in age had a lot to do with it.

Micky went to school at Jamaica College when Reginald Murray, known as "Reggie", was Headmaster. 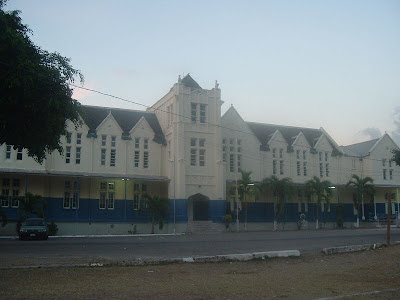 I believe he sat the Senior Cambridge Exam but left school without going on to the Cambridge Higher Schools Examination. With the help of a family friend, Cyril Tame, Micky went to work at Barclays Bank in Kingston, where he worked for many years. Men who joined the Bank at that time could expect to be sent all over the island and even to other islands where the Bank had branches, so I did not see much of Micky in this time period. One of his postings was to Trinidad so he was away for some time and there was little chance for us to develop a relationship. In fact, I would have to say that our relationship consisted of a certain amount of hero worship on my part and bare tolerance on his. He was a dreadful tease and would make my life quite miserable at times, so we just weren't that close.

Micky was incredibly popular, however, with his friends both male and female. He was very involved in rifle and pistol shooting and competed in the sport and was also a motor car enthusiast and took part in motor rallies. 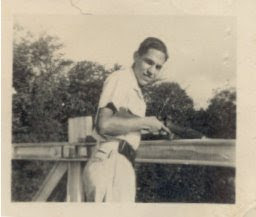 One of his favourite sports was hunting alligators,(actually crocodiles), which are now an endangered species in Jamaica, but were fair game back in the forties and fifties. He would tell the story of how, on one of his alligator hunting expeditions, his life was saved by the gristle in his mother's roast beef sandwich. Micky was squatting by the shore, eating his sandwich, and turned to spit out a piece of gristle. There, aproaching him, was an alligator with its jaws wide open. He just had time to grab his rifle and shoot it.

At a time when I was older and we could have developed a closer relationship we were once again separated by circumstances. Micky got married and emigrated to Canada where his eldest child was born. Here he is, with his son, Michael, reading one of his favourite magazines. 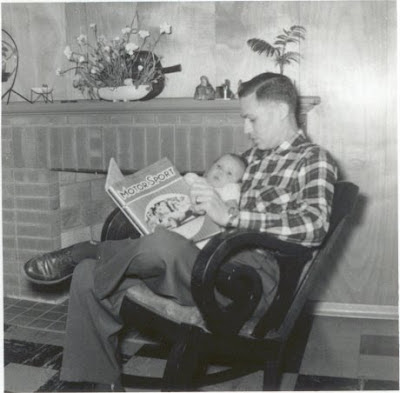 By the time he and his family returned to Jamaica it was I who was getting married and leaving the island. We would see each other whenever I returned home for a visit. In 1963, when he died of a cerebral haemorrhage, I was living in Winnipeg. We had never really gotten to know each other as adults, and that is what I regret most of all.