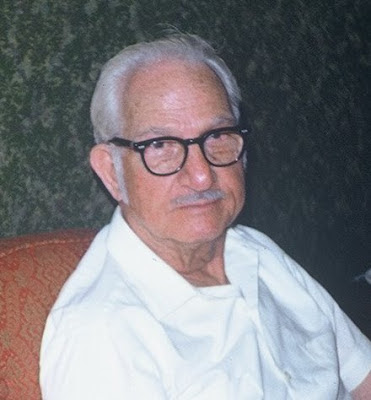 Joseph Dudley Levy was the youngest of the Levy family. He may have been the first one to leave Jamaica and go to New York, but I cannot be sure of this, as I have not so far been able to find any record of his brother, Leo's emigration, also to New York. As I mentioned in a previous post, Joe sailed from Port Antonio on board the ss Catherine Cuneo, on August 28th, 1917, and arrived at the Port of New York on September 4th. According to the ship's manifest he was age seventeen, and going to a Mrs. Warner, a friend, at 346 Summer Avenue, Brooklyn, New York. I have no idea who this Mrs. Warner might have been. Under the column "Name and complete address of nearest relative or friend in country whence alien came", Joe listed his mother, Mrs. Alice Levy, 22 Beeston Street, Kingston, Jamaica. Also on the first page of the manifest is a column headed "Race or People". It is typical of the mindset of the American authorities at that time that anyone coming from Jamaica was immediately labelled "African Black". Thus was my Uncle Joe labelled, yet at the same time he was described as fair complexion, with brown eyes and brown hair, and with a deformed right thumb.
What happened to him immediately after his arrival in New York is a mystery, as I have been unable to find him in the 1920 census. However, he does show up in the 1930 census for Manhattan, District 787, as a boarder in a household on 113th Street, headed by one Harry Petrous. It appears to have been some kind of tenement, and also in the same household were two of Joe's cousins, Adwin and Aaron Da Costa, the eldest and youngest sons of Alice's brother, Melbourne Rodrigues Da Costa. But now comes the curious part! For Joe is no longer Joseph Levy, but instead is calling himself Joseph Lavell, and in the column for birthplace he gives the information that he was born in Pennsylvania!
Here I must digress for a moment. I knew that Uncle Joe had changed his name to Lavell -- though whether or not he did it officially is not known. His rationale for doing this was that he would have faced discrimination in New York with a Jewish name, even though he was not Jewish but Catholic. I have a sneaky feeling that the name change may have had something to do with his eventual marriage, though at the time of the 1930 census he was listed as single, and in fact did not get married until 5 June 1937, but it's possible that he had already met his future wife, Alice Savitski, who interestingly enough, was born in Wilkes-Barre, Pennsylvania. Was this why Joe claimed from then on to have been born there?
Joe applied for and received United States citizenship in November 1924. I am very grateful to a researcher in New York, David Priever, who searched for me and found Joe's Declaration of Intention, in which his name is definitely given as Joseph Dudley Levy. 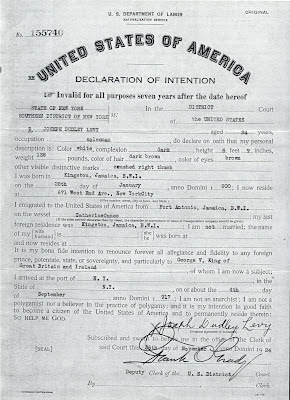 It appears, then, that Joe changed his name some time between his declaration of intention to become a US citizen and 1930 when he was calling himself Joseph Lavell.
I first met my Uncle Joe in person in 1955 when he came to Jamaica for a visit. It had been a very long time since he had seen my father, his brother. I imagine that he knew my mother, since the Smedmores lived across the street from the Levy family on Beeston Street. In fact, when my uncle, Norman Dey Smedmore, emigrated to New York in 1918 he gave Joe's name on the manifest as the person he was going to in New York City. Joe's address at the time was 1121 Bedford Avenue, Brooklyn. Although by now Joe was married he did not bring Alice with him, as she apparently did not like the idea of flying. I remember my Uncle Joe as being very American indeed in accent and behaviour. I know that my father was extremely happy to see him again after all that time.
In my next post I'll write about my visit to New York with my family, when we stayed for three days with Uncle Joe and Alice and got to know him better.
Posted by Dorothy Kew at 12:40 No comments:

It's been a while since my last post. A little over two weeks ago I had surgery -- total knee replacement, and so it's slowed me down a bit.
I want to return briefly to the 1907 Earthquake and one of the stories of the quake, the damage to the statue of Father Joseph Dupont. You may remember that this is what it looked like after the earthquake: 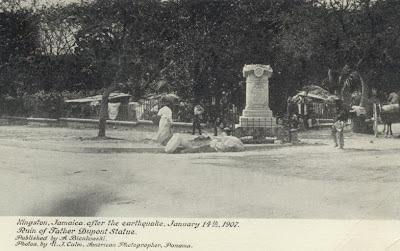 The statue was quite badly damaged as you can see. You may also remember that I showed another photo, taken about 1940, showing the statue after it had been repaired. 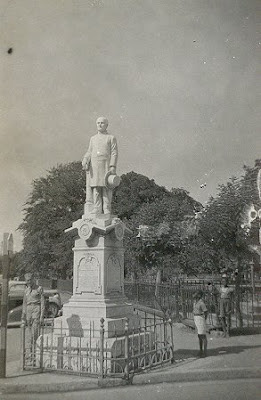 I didn't give much thought to what had happened in between, such as when was the repair done and how it was accomplished, until, while browsing through Father Francis X. Delaney's History of the Catholic Church in Jamaica, B.W.I., 1494 to 1929 (New York: Jesuit Mission Press, 1930) I came across the story behind the repair of the statue. On page 256, Father Delaney writes:

"Since the day of the great earthquake, January 14, 1907, the pedestal that supported the statue of Father Dupont, had stood empty in the Kingston Parade. It had become a spectacle of the great disaster, as well as of civic neglect and ingratitude. In the course of the year 1924, Mr. Alexander Falla started a movement to have the monument restored. A public-spirited citizen, Mr. S. J. Streadwick, opened the fund, and Mr. James Dunn contributed the substantial sum of fifty pounds. The editors of Catholic Opinion and of the daily Gleaner took up the cause and the result was that about two hundred and twenty pounds were collected from people of every class and creed. The statue was publicly unveiled by the Governor of Jamaica, Sir Edward Stubbs, and presented to the city of Kingston, represented by the Mayor, Honorable A. E. DaCosta, on Sunday, September 11, 1927, the year which marks the eightieth anniversary of Father Dupont's coming to Jamaica and the very day which marks the fortieth anniversary of Father Dupont's leaving his adopted Jamaica for his home in Heaven".

This was indeed an ecumnical effort to restore Father Dupont's statue. S. J. Streadwick, for example, was a staunch Anglican, yet, as Father Delaney writes, people of all classes and creeds moved together to subscribe to the statue's repair.

I'm interested in Father Dupont because he baptized some of the children of my great grandparents, Jacob Rodrigues Da Costa and his wife, Selina Jane Roberts. Here, from Father Delaney's book, is a picture of Father Dupont. 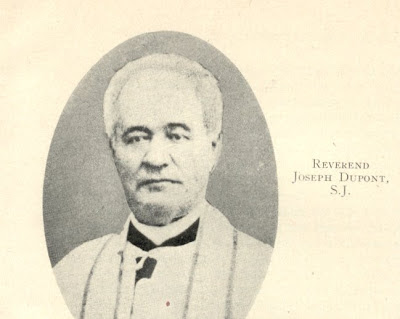 According to a brief story in the Gleaner of January 28, 2007, Father Dupont was born in Savoy, France in 1809, and came to Jamaica as a priest in 1847 where he remained for forty years ministering to the poor and establishing missions all over the island. The original statue to his memory was erected in 1892, by public subscription and the Gleaner notes that Father Dupont was the only clergyman to have a statue erected in his honour in Jamaica, so he must have been universally loved and respected.