It’s been a busy summer and I’ve neglected My Jamaican Family, but I’m back now, carrying on the story of the Cunha family and their connection to the Fords. I knew nothing about the Fords, and my curiosity about them was stirred by the marriage of Percival Cunha to Marianne Bravo Ford in 1879. Here is a copy of their marriage record.

They were married 27th August 1879 in St George’s Anglican Church by Enos Nuttall, who later became Bishop of Jamaica. Both were listed as of full age, though their ages were given on the record, and the witnesses to the marriage were all from the Ford family – Jas D. Ford, Florence Louise Ford and Henry B. Ford.

So, who were these Fords anyway? The first task was to find out who Marianne’s parents were. Since Percival and Marianne were married in the Anglican Church I assumed that she must have been baptized in that church, since the Cunhas were certainly Methodists. I found Marianne’s baptism in the Church of England copy registers and saw that she was born 5th February 1858, daughter of James Dearmer Ford and his wife, Cordelia and that she was christened Marianne Bravo. So now I knew that the Jas. D. Ford who was a witness at her marriage had to be her father, James Dearmer Ford. My next step, then, was to search for the marriage of James Dearmer Ford to this Cordelia. I could not, however, find any trace of the marriage in the Anglican registers, so moved to the Dissenter Marriage Registers, on the off chance that they were married in another Protestant denomination, and sure enough, they were. I found that James Dearmer Ford and Cordelia Henriques were married by license on December 15, 1852 in St. Andrew’s United Presbyterian Church in Kingston by one James Watson. Here is their marriage record:

James was twenty-seven years old, a bank clerk, and Cordelia was twenty-one, so both were of full age to be married. The witnesses at this marriage were Henry Ford (again!), an M. Mais, Catherine Dean, Mary Ann Melhado and F. G DaCosta. Here is a recent photo of St. Andrew’s Presbyterian Church, now known as Scots Kirk.

The names Melhado and DaCosta are Jewish, as is Henriques, which made me wonder if Cordelia had married outside of her faith. I therefore searched the Jewish records to see if I could find her birth, which, based on her age at marriage, would have been about 1831.


However, I could find no trace of Cordelia’s birth in the Jewish records, the originals of which are in the National Archives in Spanish Town, but which have been transcribed by Mrs. Phyllis Delisser and can also be found on the Jamaican Family Search website. According to Donald Lndo’s CD, Genealogy of Jamaica, Cordelia was the daughter of one Benjamin Quixano Henriques, who had married Abigail Mesquita, though no date for her birth was given. The source for this was First American Jewish Families, a compilation by the late Malcolm H. Stern, originally published in 1960, the third edition of which was published in 1991. It is also online at http://www.americanjewisharchives.org/FAJF/intro.php.  Stern gave a list of children for Benjamin and Abigail, which included Cordelia (no birth date) and the notation that she had married “Ford”. I was able to find four of these children in the Sephardic records and noted that the last one listed, Nathaniel, was born in Spanish Town in 1927. It’s possible that the other children born after Nathaniel were also born there and that their births were not sent to the synagogue in Kingston and so have not survived in the records. One curious omission in Stern’s list was that of Amos Henriques, born in 1811, who later became a well-known physician and is written up in the Jewish Encyclopedia. In researching Amos I discovered the notice of his death in 1880 in the Jamaica Gleaner of July 7th of that year, which clearly stated his relationship to Cordelia, thus confirming her paternity.

At 67 Upper Berkeley Street, London, of 5th June 1880, of Paralysis of the Heart, Dr. Amos Henriques, aged 72, formerly of Kingston, and deeply regretted by an affectionate wife and children, his sister here, Mrs. Jas. D. Ford, two brothers in Australia, and numerous relatives and friends here and in London.

So now I knew that James Dearmer Ford had married a Jewish girl, but who was he and where had he come from? Unable to find any information about him in the records I started searching the Gleaner for any stories about James Ford and his brother Henry, and it was through Henry, or rather his lengthy obituary published in the Gleaner on November 18, 1901, that I learned the origins of the Ford brothers. 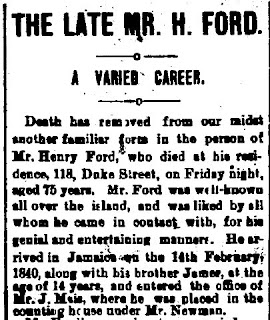 There it was – James and Henry had come to Jamaica on February 14, 1840! It seemed to me that they had most likely come from England and so I changed course and began researching in English records to see what I could find. In my next post I will describe my research into the Ford family.
Posted by Dorothy Kew at 19:33 8 comments: