Looking for Levys -- a moveable family

My first foray into genealogical research on my father's family was to find and confirm the births and deaths of all the children of Leopold Levy, the mystery man from Alsace, and his wife, my grandmother, Alice Rodrigues Da Costa. I had been given the names of some of the children. I knew that there had been a daughter, Daisy, who died in infancy and a son, Gustave, who also died young. I knew that my father was the eldest surviving and that he had a sister, Essie, and two brothers, Leo and Joe, and that all three were in the United States. We would hear occasionally from Joe, whereas nothing was ever heard from Leo. Essie did keep in touch with my mother, and I know that my Mom and Dad visited her and her husband, Erich, in Fort Worth where they lived. (They had also lived in Muskogee, Oklahoma). Later this correspondence would cease as a result of Essie's descent into dementia, though my mother did continue to keep in touch with the wife of their only son, Walter, my first cousin, also known as Bunky. I never met him nor did we ever correspond.
But to return to the Levy children. In my last post I mentioned that the eldest child, Daisy, was born a scant two months after the marriage of Leopold and Alice in Colon, Panama. Alice returned to Jamaica and Daisy was born 23 September 1886 at 106 King Street, and, as I mentioned, the informant on the birth register was a Mrs. Jacob Rodrigues Da Costa. The father's name on the record is Leopold Levy, occupation "merchant", abode "Colon", so Leopold was not present at his daughter's birth.

As I found the births of the other children, and the deaths of Daisy, Lucien and Gustave, I noticed two things: first, Leopold was the informant on only two of the ten events I found: the birth of Lucien, the second child, and the birth of Gustave, the fifth child. The second thing I noticed was that the addresses where these events took place kept changing. In a span of fourteen years the Levy family lived at seven different addresses in Kingston!
What was the significance of the fact that Leopold was the informant on only two events? Did it mean that he wasn't there? I've done a lot of research in Jamaica and looked at a great many birth records and generally speaking the father is usually the informant when the child's birth is registered. I'd be interested in hearing from other Jamaican researchers regarding this. Yet, with the Levy children the two people whose names show up on six of the ten events are those of Alice, their mother, and Selina Rodrigues Da Costa, Alice's mother. More about her in another post. Certainly on Essie's birth registration Leopold's address is given as Port-au-Prince, Haiti. On the other records it appears that Leopold is in Kingston, so why is he not the informant? In fact, the birth of the youngest, Joseph Dudley, was registered by a Cathy D'Costa who, I finally figured out, was most likely the wife of Eugene Da Costa, Alice's nephew, the son of her older brother, Joseph.
Then there's the moving around! Here is a list of events which shows the various addresses the family lived at:
-- Daisy is born in 1886 at 106 King Street
-- Lucien is born in November 1887 at 83 Church Street
-- Daisy dies in December 1887 at 83 Church Street
-- Michael is born in 1889 at 127 King Street
-- Lucien dies in 1890 at 125 Tower Street
-- Essie is born in 1891 at 125 Tower Street
-- Gustave is born in 1894 at 121 Orange Street
-- Leo is born in 1895 at 13 Rosemary Lane
-- Gustave dies in 1899 at 68 Duke Street
-- Joseph is born in 1900 at 68 Duke Street
Here is a section of Stark's 1897 map of Kingston showing the area where the family would have been. 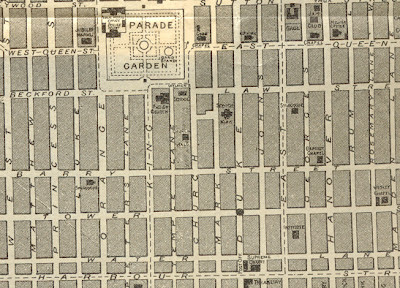 Why did the family move around so much? Again, this is not usual. My research has found that families usually seemed to stay in one spot, so it was quite common to see children being born at the same address over the years. This would, of course,indicate that the family in question owned their home. I believe that the Levy family must have been renters and more than likely were not financially secure. Certainly if Leopold was away a great deal money may have been tight. Eventually my grandmother Alice would own a home, at 22 Beeston Street, but I do not know when this was purchased. When Joe emigrated to the United States in 1917 he gave his mother as next of kin and that was the address that was listed for her on the ship's manifest. I know that my father helped her to pay the mortgage on the house before he was married.

Sometimes finding vital records about the family one is researching can lead to more questions than answers. I'll continue with this in my next post.
Posted by Dorothy Kew at 19:20 5 comments: