All the Sevens ... or Way Past My Shelf Date

I’ve been feeling guilty as I haven’t updated my blog for about four months, and wondered what I should write about next. Well, today is my birthday and I’ve reached the august age of seventy-seven … so I thought perhaps it was time to blog about myself for a change. The first thing to think about was what should I call this post? The title “Way Past my Shelf Date” came to mind, based on that wonderful quote from Psalm 90, verse 10: “The days of our lives are threescore years and ten …” which would seem to suggest that to live beyond seventy is to do so on borrowed time … Which is why I prefer “All the Sevens”. In my teenage years and somewhat later I used to go to the Sergeants’ Mess at Up Park Camp with my pal, Sheila Bewley, whose older sister, Dawn, had married a Sergeant, Andy Taylor, who was stationed there. There we played Tombola, a type of British bingo, which, if I remember correctly went up to 99, and was not played under letters like B I N G O , but had its own language. So 77 was “all the sevens”, 99 was “all the nines”, but 66 was “clickety-click”. 21 was “key of the door” … any number ending in zero was “blind”, i.e. 50 was “blind 50”, yet 11 was “legs eleven”, and so on. Perhaps there are some of you out there who remember all this …

I was born on May 31st, 1935 at Nuttall Memorial Hospital, at Cross Roads, Jamaica

The hospital was founded in 1923 built on land purchased by the Diocese of Jamaica and commemorates the work of the Reverend Enos Nuttall, Bishop of Jamaica, after whom it is named.  My parents, Michael Levy and Maud Smedmore, already had one son, Mickey, born 2 April 1927. They were then living at 7 Anderson Road, . My father was a civil service clerk in the Government of Jamaica. There is a photo of my brother, Mickey, probably taken at Anderson Road 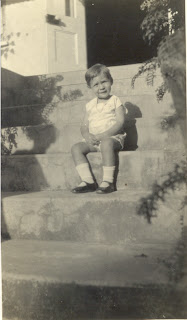 I have no memory of this place to go on, only the photo.

When I was six months old my parents bought the house at 5 Holborn Road. I found an advertisement in the Gleaner of 5 August 1935 advertising the house as follows: 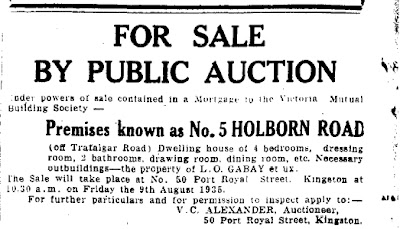 I guess they must have bought the house at that time. It’s the only home I remember. Here’s a photo of my parents with me as a baby in front of the house at 5 Holborn Road -- 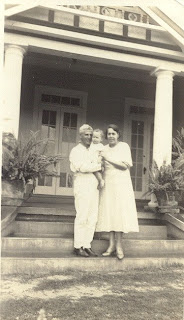 My earliest memory of my birthday is of my fourth … I vaguely remember having this huge tube, like a very large Christmas cracker, which when opened contained all sorts of goodies. I don’t remember the contents, but I do remember dragging the container around the yard of our home at 5 Holborn Road. Somehow this was much more fun for me than whatever had been inside it.

I remember my childhood as being a very happy one. In a way I was almost an only child, as my elder brother, Mickey, was eight years older than I was and would have nothing to do with me. I realize now that, as the only male child in the family he had been quite spoiled until I came along … My mother’s aunt, Aunt Tess, made much of me and poor Mickey’s nose was quite out of joint, as we used to say. This led, of course, to ill feelings on his part, which I now understand, but did not at the time.

Our family was not that large. There were, of course, the aunts and uncles, all Smedmores, and of whom I’ve written before in my blog. I knew nothing about my father’s family on his mother’s side, the Da Costas, something I have always regretted. On the Smedmore side I had two cousins … daughters of my Uncle Lucius who had married Carrie May Burke, aka Maisie. They were both older than me. There was my cousin, Marjorie 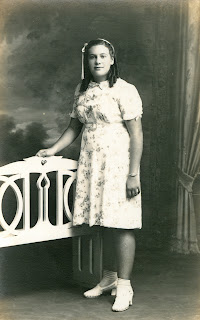 And my cousin, Gloria 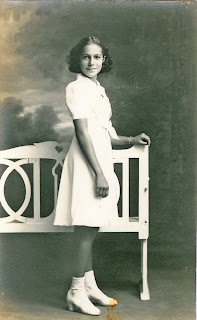 Marjorie had been born in 1925, so was two years older than my brother, Mickey, thus ten years older than me, and Gloria was born in 1927,a few months after Mickey. Both of them would have considered me as a mere child, so I really had not much interaction with them. I had another first cousin, whom I never met.  This was my cousin, Walter Berner, the only child of my father’s sister, Essie, who had married Cort Berner, and who lived in the . He was known as “Bunky”. I never had the opportunity to meet him, but I have made contact since with his daughter, Cheryl.. 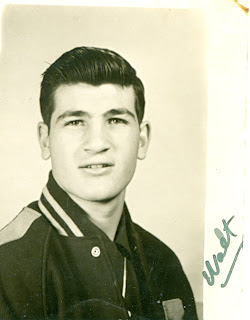 In my next post I’ll reminisce some more about my childhood memories.