I never knew the children of Joseph and Hannah Da Costa. What I do know about them I have managed to glean from various sources, including the Daily Gleaner, and such genealogy databases as Ancestry and Findmypast. The picture that emerges about Ida, the eldest, shows her to have been a particularly resilient person. She was one of the witnesses when her parents married and would have been about seventeen or eighteen at the time. As the eldest she must have been responsible for her younger brothers. Perhaps she worked with her parents in the Commercial Hotel. At any rate, at the age of twenty-one she married an Englishman, from Cornwall, Frederick Walter Couch.

Frederick Walter Couch, aged 28, arrived in Jamaica in 1886, according to a notice in the Gleaner of November 10th of that year. He left behind him three children and their mother, to come to Jamaica as a master tailor in the employ of Richard Recuero, whose business, El Fenix, was located at 117 Harbour Street. The item in the Gleaner, which referred to Frederick as “Mr. Crouch, a celebrated Continental cutter”, stated that he had been engaged by the firm of Messrs. Recuero and Co. “for their outfitting establishment which has just been opened at the corner of Temple Lane and Harbour Street.”
We don’t know how and when Frederick met Ida. They were married 6 May 1891 at St. George’s College, then located at 26 North Street, by the Rev. Fr. Patrick J. Hogan, S.J. Frederick stated that he was a bachelor, a merchant, aged 31 … he was actually 33 … father, Frederick Couch, and gave his address as Lilias Cottage, Hope, St. Andrew. Ida was listed as a spinster, age 21, of 101 Harbour Street. No father was named on the record but Joseph Da Costa was one of the witnesses along with an Agnes Maud MacDonald.
Did Ida know that Frederick had been in a relationship in England with a woman named Emily Jane Prout, with whom he had fathered five children (two of whom had since died)? No marriage has ever been found for Frederick and Emily, although she claimed to be his wife on birth registrations of their children. I am sure that Ida as a devout Catholic, as was her mother Hannah, would not have knowingly entered into a bigamous marriage. At any rate, she traveled with Frederick and their first child, Frederick Joseph, born 9 November 1891, to England in June of 1892 and it appears that they stayed with Frederick’s father and mother, Frederick and Amelia, at 19 Westgate Street, Launceston, Cornwall, as that is where their second child, Eugene Adrian, was born on the 21st July 1893. What then does this say about Frederick’s relationship with Emily Jane Prout? Was Ida welcomed because she and Frederick were married?
Frederick had apparently parted company with Recuero and Company, a provisional order of bankruptcy having been filed against the company according to the Gleaner of October 20, 1891, and had entered into partnership with Octave Lay of 29 King Street. 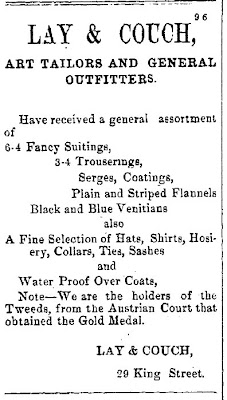 Ida and her child, Frederick Joseph, must have returned to Jamaica about 1894, as her third child, Violet, was born there, on May 22, at “The Laurels”, St. Andrew. Ida was the one who registered the birth. We cannot be sure that Frederick had returned with them. He certainly sailed from Southampton on November 10, 1894, for New York, but he must have returned to Jamaica some time after that, as their fourth child, Ida Winifred, was born 15 February 1896, also at “The Laurels”. Once again the birth was registered by her mother, Ida. Frederick, meanwhile, was again on the move where his career was concerned. A new advertisement appeared in the Gleaner of April 5, 1895, in which there is no mention of Octave Lay.

The ad is hard to read but the text at the bottom states: “I the original F. W. Couch begs [sic] to notify the public in general that I have no connection whatever with any other firm in the Parade”.
What happened after that to the family is somewhat of a mystery. From what I’ve learned it appears that Frederick deserted Ida and her children and was not heard from for some time. He supposedly traveled to California and may well have been in San Francisco during the 1906 earthquake, as a result of which he returned to Jamaica and resumed his relationship with his wife. On 17 December 1907, their fifth and last child, Stanley Noel, was born at 34 Victoria Avenue, Kingston. Shortly after, according to what I have been told, Frederick once again deserted the family, supposedly sailing to South America. No other information about him could be found until the following notice appeared in the Gleaner in July and August of 1915. 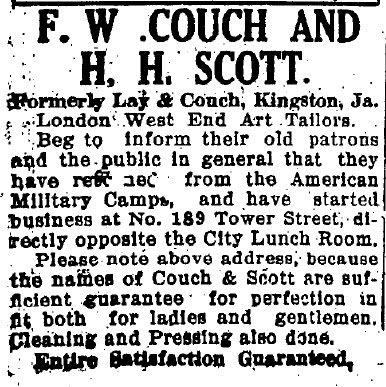 This was very curious, as from what I’ve been told, no one ever stated that Frederick had returned to Jamaica and Ida certainly was no longer living with him. Her father, Joseph, had left her £300 in his will, which must have been a great help to her as her situation cannot have been easy. One by one the family left Jamaica. Her daughter, Ida Winifred, traveled to England and spent some time with her uncle, David, in London, and from there sailed to New York where Eugene, her older brother, was living, having gone to the United States in 1912. He became a naturalized citizen in 1922. Ida and Stanley must also have gone to New York at that time although I have not been able to find a record of their sailing, so they probably were not even in Jamaica when Frederick returned. Ida apparently traveled back and forth between New York and Jamaica. I found her in 1921, sailing with Violet and Stanley and by herself in 1924 again traveling to New York. On the 1924 manifest she indicated that she had been living in the U.S. between 1912 and 1924. She described herself on the ship’s manifests on both occasions as a widow … so was Frederick dead, or did Ida consider him to be as good as dead? Again, we don’t know. She and Stanley eventually returned to Jamaica, as did Frederick Joseph and Violet.
By a strange coincidence, Stanley worked for some time at Desnoes & Geddes, bottlers of Red Stripe Beer among other beverages, about the same time that my father, Michael Levy, worked there. Did they know that they were cousins? Who knows? It’s another one of the family mysteries that probably will never be solved.

To Canada From Jamaica, With Love 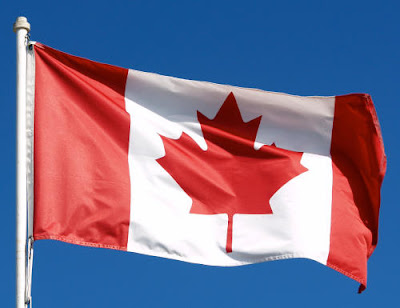 Happy Birthday, Canada! You're looking pretty good for 142! Wish we all could age as well.

I speak as an expat Jamaican who has made her home here for the past forty-nine years, more than twice the years I spent in my birthplace. Canada is home to many Jamaicans, expats who came here for many reasons ... perhaps they went to school or university here and decided to stay; they may have married a Canadian, as I did, and thus made it their home. Many Jamaicans came here in the seventies, the unhappy times in Jamaica, when Canada seemed to offer a safe place, a better place to live and raise our children.

Whatever the reasons, many of us have lived here for a long time ... we have adapted, well sort of. I'll never get used to winter. Mon pays, ce n'est pas l'hiver ... give me spring, summer and fall ... but we survive. Sure, we miss the tropical weather, the sea breezes, the easy-going laid-back life ... soon come, mon! We miss the bright colours of the bouganvillea, the poinciana, the flame of the forest. We miss the food ... oh, we can replicate it, but is isn't quite the same. We miss the salt air of the sea, the soft white sand between our toes ...

But we're here, Canada is our home, and we are happy and safe and living in the best possible country on earth. So, Happy Birthday, Canada! And many more of them!
Posted by Dorothy Kew at 16:43 6 comments: