Once again I have been tardy in updating my blog. I feel that I have left Joseph and Hannah Rodrigues Da Costa in limbo while I dealt with other responsibilities. It's way past time to get back to their story -- a story I've managed to piece together using what records I could find about them and their family as well as stories in the Jamaica Gleaner. It's hard to put together a family history when you have no context, only names to go by, so I've been really lucky to find various bits of information in the Gleaner which have helped me enormously.
Joseph was the proprietor of the Commercial Rooms at 101 Harbour Street, as per an advertisement in the 1891 Kingston Directory, which appears on the Jamaican Family Search website as follows:
Commercial Rooms
101 Harbour Street (Upstsirs)
Bar & Billiard Saloon
Joseph DaCosta, Proprietor
N. B. Telegrams received daily, and can be read immediately on arrival. Also late English and American papers.
Telephone 167
Besides this ad he also advertised regularly in the Jamaica Gleaner. One of the earliest ads I found was this one in the February 15th, 1894 Gleaner: 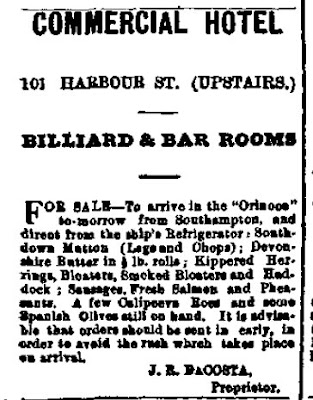 Joseph seems to have imported all sorts of goodies for sale at the Commercial Rooms so he was quite the entrepreneur. Most of the ads I found were of this nature.

How did Joseph come to own the Commercial Rooms in the first place? Well, based on a brief article I found in the Gleaner of January 6, 1886, it appears that Hannah, his wife, was the original owner and Joseph was her manager. (At this time they were not married though they had had three children together.) The report in the Gleaner stated that Hannah, as proprietress of the Commercial Hotel, had appeared in District Court charged with keeping her hotel open later than eleven o'clock and also "unlawfully and knowingly permitting disorderly conduct in the same hotel on the night of the 9th December last." The defence was that on the night in question a large group of disorderly sailors, armed with marlin spikes, had entered the hotel "for the purpose of avenging an insult that one of their comrades had received the night before. Seeing that they meant mischief, Mr. Joseph DaCosta, the manager of the hotel, did his best to induce them to leave quietly." Fortunately the defence was accepted and his Honour decided in favour of the defendant.

Joseph's bravery did not go unrewarded as he and Hannah were married two years later on November 22, 1888, and from then on it is Joseph's name that is associated with the hotel and billiard rooms. Many ads appeared in the Gleaner extolling the various imported foods that Joseph had brought in. Joseph was also involved in horse racing. An ad in the Gleaner in 1891 for the Cumberland Penn Races stated that tickets for the grounds, stands and carriage enclosure could be purchased at the Commercial Hotel, at four shillings and ten shillings and sixpence respectively for the Grand Stand and Special Stand. An interesting sidelight to Joseph's career, particularly as his son, Eugene became quite the turfite and even wrote a book on the history of horse-racing in Jamaica.

Joseph died at the relatively young age of sixty-three in 1910 of chronic heart disease, certified by Dr. F. H. Saunders. His obituary in the Gleaner of September 27th, 1910, referred to him as "well known for his sterling character and his great business ability. All those who came in contact with him -- and his friends were legion -- admired his pleasant disposition, his quiet demeanour, and his charitable qualities."

Hannah outlived her husband for many years, dying at her home in Rae Town on 27 April 1925. Her obituary in the Gleaner spoke of her as charming in her manner and a pleasure to converse with.