A Jamaican Childhood -- Remembering My Teachers 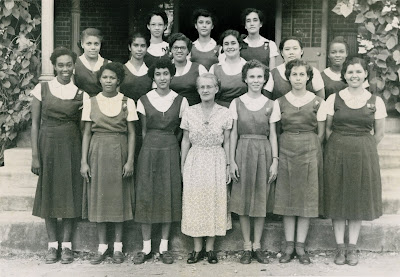 In 1951, much to my surprise, I became a prefect,. Here I am in this photo, front row, second from the right and one girl away from our Headmistress, Margaret Gartshore. Miss Gartshore was a tiny little woman with a bouncy walk which earned her the nickname “Diana Pom Pom”, shortened to “Pommy” but never used in her presence! Although tiny she was mighty and mighty scary too. Pommy could freeze you to your very soul with one look and the worst event any St. Andrew High School student could experience would be to be called to the Office to speak with Miss Gartshore

Miss Gartshore had a Scottish accent and I always imagined that she had been born in Scotland. According to SAHS history, her sister, Janet, aka Jenny, had been the first headmistress, but had retired on getting married and Margaret took her place as Headmistress, a position she carried out faithfully for thirty-one years. Recently, in doing some online research into Jamaican records, I found that Pommy and her five sisters with the exception of her brother, John, had all been born in Jamaica, in Brownsville, in the parish of Hanover. Their parents were John Ferguson Gartshore, a Presbyterian minister from Scotland, and his wife, Jeannie. Their only son, John, was born in Kingston, where, presumably, the Reverend Gartshore was called after his time in Hanover. Margaret and her sisters, Janet and Jeannie, all attended the University of Glasgow, as had their father, Reverend John Gartshore.
According to her biography on the website of the University of Glasgow, Margaret had
enrolled in the University in 1914 and attained an MA, studying History, English, Logic, Scottish History, Geography, Political Economy and French. In 1957, the year she retired from St. Andrew High School, she was awarded the Order of the British Empire for her services.

Miss Mary Dawson became Headmistress after Miss Gartshore’s retirement. This was after my time at SAHS, as I had left school in 1953, and Jamaica n 1957. However I did recall Miss Dawson, as she was one of my science teachers in the Fifth Form, along with Miss Liversidge.  Here they are on the grounds of the school, probably in the early fifties. Miss Dawson is on the left. 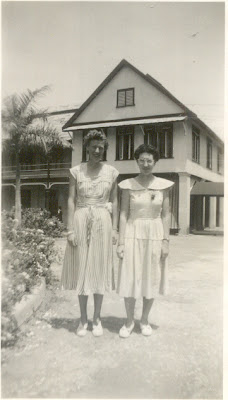 Miss Mary Dawson and Miss Liversidge
One of my favourite teachers in the Fourth Form was Miss Nora Taylor, who came out from England to teach at St. Andrew’s.  Sadly, I have no photo of her, but I do remember how popular she was with all the Fourth Formers.  She taught us English and was a great teacher.  The only item I could find about her in the Gleaner was this brief article from the newspaper of November 3rd, 1947 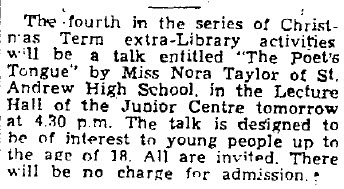 Another of my teachers who made an impression on me, though she was not at St. Andrew High School for very long, was Audrey De Sola Pinto, who taught us geography in Fifth Form.  Miss Pinto, the descendant of two well-known Jewish families, the De Solas of Britain and the Pintos, of both Britain and Jamaica, had been an SAHS pupil herself 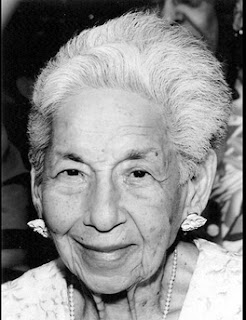 Audrey De Sola Pinto
She was born in the Canal Zone, Panama, on 14 November 1919, to Claude De Sola Pinto and his wife, Sybil Idalia Delgado. It is a measure of the diversity and ecumenicism of Jamaican life that she, an observant Jew, not only taught at a Christian school, founded by Presbyterians and Methodists, but also at St. Hugh’s High School, an Anglican institution, and became Headmistress of Wolmer’s High School from 1962 to 1984.  Audrey Pinto died in 2011.


In my next post I’ll continue my reminiscences about some of my teachers at SAHS.